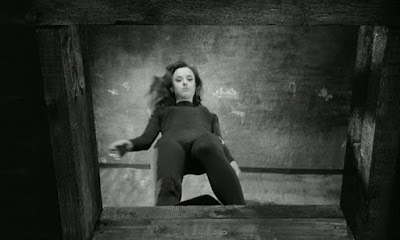 
Or the return to sources: it is, more than ever, the shot, the image that is guiding the film; it’s its logic that is in charge of the events. That is, any remark is in vain that doesn’t first take this into account: white and black, their nuances, their contrasts, their interplay and conflicts: this is the subject matter of Judex — but without referent, or reference, to some ‘beyond’, or abstract signification, within their appearances alone, and those by which they dress things up. Of those obscure silhouettes clinging to the length of a wall bathed by Kleig lights, there is nothing to infer, except to contemplate their inexorable ascent; of those human-birds, metaphysical-nothing, except to follow the ritual of an unknown ceremony, whose order is precisely (as we see it, as we go along) to open itself up by a pent-up pigeon, and to end in death: this is true, then false, but true resurrection, as Edith Scob, as it so happens [“au fil de l’eau”], is a real dead girl and a fake drowned one, then the opposite.

Nothing but appearances, but all in the same movement as their emergence, their birth, their invention: secret of the origin of the cinema, that exists here as though it were, from now on, no longer referring to a secret. But at the same time, our astonishment before it: Franju is at once the one who, through science, rediscovers the secret, and the modern one who knows it’s lost — and, astonishing himself with his power, keeping watch over the secret, affirming it, at last, beyond all doubt.

This English translation, made in 2008 by Craig Keller, first appeared in the booklet of the Eureka/Masters of Cinema DVD edition of Georges Franju's Judex (1963) and Nuits Rouges (1973). Many thanks to Keller for his kind permission to publish it here. 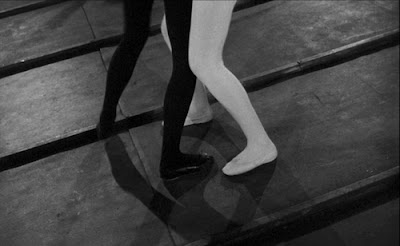 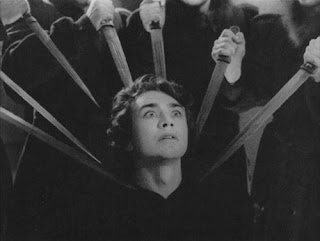 Eisenstein's writings most often treat questions of montage and time, but his genius is nevertheless essentially plastic. Undoubtedly he devoted himself to problems of rhythm for such a long time simply because they always remained problems for him, problems he never really solved. That evolution which everyone deplores is deplorable only because there are always observers to lament the fact that creators extend themselves to the limit of their capacities. Ivan the Terrible, the culmination of Eisenstein's career, is also the apotheosis of his plastic genius. And we must understand "plastic" in its highest sense. Geometrical obsessions, the systematic deformation of lines, the amplification of stylization of gestures, all those processes which most diretors use only as affectation or in an attempt to disguise their weaknesses, are here really the goal of direction. There is no need to paraphrase Malraux to show that it is impossible to separate the role of metaphysics from that of expression, and that Eisenstein's greatness lies precisely in the union of the two. The most formal of directors is haunted by the sacred; in his work everything tends toward the ceremonial, and the ceremony can be that of the oratorio, of ballet, or of religious celebration. Everything is directed, not toward a new way of reproducing reality, but toward finding a style of "representation," almost an allegorical figuration. The combined influences of, among other things, Noh drama, Leonardo, and the rites of the orthodox Church, finally create a universe of pure liturgy in which the aesthetic replaces the mystical. Beyond all doubt, Eisenstein's ambition is of an esoteric order. But far from harming him, this esoteric quality is perhaps the best guarantee of his survival. Earth and Mother have lost their prestige within a few years because their directors had no secrets, they had only processes. Eisenstein, on the other hand, staked his all on the realm of the secret and voluntarily submitted all the spectacular elements of his films to wholly abstract and private thought. 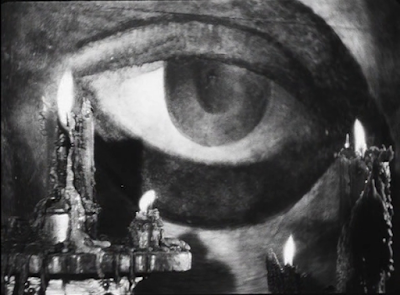