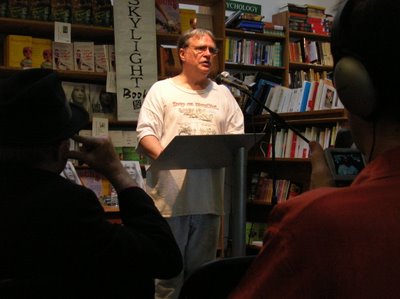 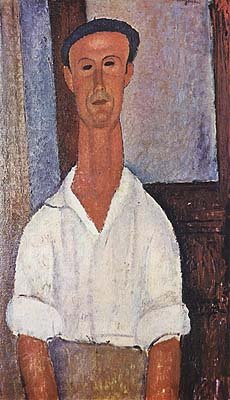 Bill Krohn speaking about Bunuel's lifelong Jovian thuderbolts... hurled at the fascists...
Gaston Modot looks on (thanks to Modigliani, Bunuel, Renoir, Becker, Gance...)
* 12:40 AM No comments:

Thank you Scott Foundas
(his defense of Colossal Youth):

"There were few if any boos at the end of the press screening of Portuguese director Pedro Costa’s Colossal Youth, but that was because anyone likely to jeer (including the entirety of the three rows seated in front of me) had long ago fled the theater — many of them during the scene in which a methadone addict named Vanda pours forth a long, rambling monologue about childbirth, while a man called Ventura, who may or may not be Vanda’s father, listens inexpressively. Like all of the characters in Colossal Youth, Vanda and Ventura are “played” by real Cape Verdean immigrants enacting thinly fictionalized versions of their own lives, and to the extent that the film has a plot, it’s about how Ventura’s already tenuous existence descends into chaos when the demolition of the Lisbon housing project where he has lived for more than 30 years coincides with his wife’s decision to leave him. From there, Ventura sets out on an itinerant odyssey, dazedly wandering between his gutted-out former residence and a couple of prospective new ones, crossing paths with a succession of similarly displaced and/or dispossessed persons whom he refers to as his 'children.'

"Developed by Costa in close collaboration with his nonprofessional cast, many of whom contributed their own storylines and dialogue, Colossal Youth was whittled down by the director from more than 300 hours of footage shot over a 15-month period. The result is a harsh, nightmarish and often terribly beautiful film set against a world of peeling paint and crudely nailed planks, through which moves this solitary man grasping at the flickering embers of some real or imagined past. It is a movie in which marginal people living on the edges of society are treated with dignity and allowed to tell their own stories in their own unmistakable voices. And it is quite unlike anything that you or I have ever seen before.

"It’s no exaggeration to say that Colossal Youth was the single most divisive film at Cannes in 2006. Even before anyone had seen it, some Costa detractors were badmouthing the film up and down the Croisette, accusing the director of being a fraud championed by a few highbrow critics said to get off on his films’ impenetrability. It was a sentiment summarized succinctly by the Variety review, which opined that the film would “hold the Portuguese director’s coterie of fans in rapt attention while proving a colossal bore to everyone else.” But does the fact that a movie is destined to reach only a limited audience prevent it from being great? I grant that Colossal Youth isn’t for everyone: The pacing is slow (there are maybe 30 or 40 shots over the course of two and a half hours of screen time), and sometimes we are looking, for minutes on end, at two people lying on a bed watching TV, or sitting in a cramped, dimly lit room playing cards. Yet in the week since I saw the film, it has haunted my dreams and is still with me upon waking. If there were many good movies in Cannes this year, and perhaps even a couple of great ones, Colossal Youth is the only one I would venture to call heroic.

"The decision of the Cannes programmers to include Colossal Youth in the official competition struck even some of the film’s admirers as perverse, but to my mind it is the very sort of radical gesture by which Cannes continues to define itself. Like several other filmmakers who premiered new films at the festival this year — including the Argentine Lisandro Alonso and the Paris-based American expat Eugène Green — Costa is a director whose work is scarcely known within the borders of his own country (let alone elsewhere) and who needs a stage like Cannes upon which to present it, lest he follow in the footsteps of so many great artists not duly recognized in their own lifetimes. " 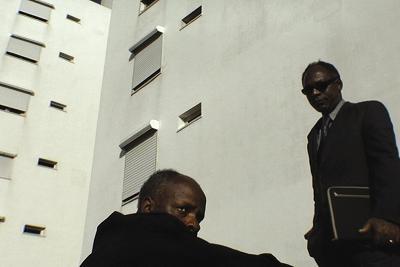 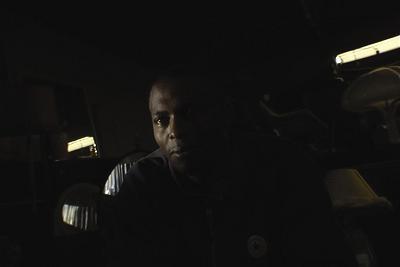 From Ebert's last Cannes report:
"Sunday morning in the Hotel Splendid breakfast room, my favorite Cannes expert Pierre Rissient predicted that the big prize would shock everyone by going to “Colossal Youth,” by the Portuguese director Pedro Costa. Pierre is such a legend they are naming a theater after him at Telluride this year, but he was, to put it delicately, wrong. “Colossal Youth,” unseen by me, tells the story of a Lisbon worker whose wife leaves him, and he moves from a slum to a housing complex. Why didn’t I see it? Because Mary Corliss did. She is the wife of Time film critic Richard Corliss, who told me: 'Mary walked out after an hour because the movie made her feel like rats were fighting in her skull.'”

real rigorous, not seeing a film based on the opinion of a bad critic's wife. What a horrifying image...rats fighting in her head... if thats what happens when a filmmaker respects you, you have other problems! Such reactions are deranged, not the films. One only has to ponder the rabidity of the sort of films that ease the minds of critics like Corliss or his wife to know what's healthy and what's not.

PEDRO COSTA: It's not a creation its a meeting. I make films because I meet certain people in certain places. (...) And I think that's important to show certain things like that, it's innocent enough...

We don't want to stop, we have things to do, things to work on. I think cinema's tools require us to make efforts; not everything is lost.

Nevertheless I think that I would do everything for cinema to be like it was in the past. It was an art which educated me, which trained me morally, politically, artistically, aesthetically. I learn so much from films and the way I put into practice my production.
When I say production I mean how to treat people. (...)

QUESTION: Do you expect the cinema viewer to make an effort watching your film?

PEDRO COSTA: Yes. But it's sort of an awareness. I'm not asking the cinema goer to suffer, I just want them to be sensitive and that's what worries me about being here (in Cannes). Perhaps people are not really paying suffient attention. And there should be some nervous tension.

From the Archive of the Youth Brigade For the Import of the Films of Pedro Costa
* 12:03 PM 2 comments: