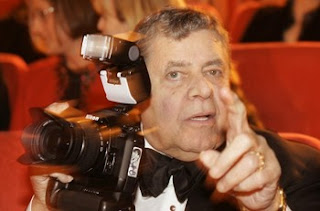 "This business is scrounging around for what to do," he said. "The medium is busy knocking its brand out to display the fat lady at 375 pounds (who) in two months is gonna be 240. Who gives a shit?" He continued, "The industry has destroyed themselves. It's no longer relevant because it puts out all of its product on a stupid phone. You're going to put 'Lawrence of Arabia' on that goddamned stupid sonofabitch?" (Speaking of Twitter and Facebook) "They're wonderful technical advances. But once people see how much it's cluttering their life, they'll figure it out for themselves. ... We're not going to have human beings in 20 years. People won't be talking to other human beings."

(Said earlier this afternoon. From Deadline Hollywood, this)
* 4:21 PM 3 comments: