Upton Sinclair's novel OIL! is today pointed at the snifter audience (via Paul Thomas Anderson). The editing of Eisenstein's QUE VIVA MEXICO! is wrested from his hands and pointed at the "gum-chewing" audience by Upton Sinclair. Sinclair makes THUNDER OVER MEXICO out of one section of what Eisenstein had shot. The WORKERS FILM AND PHOTO LEAGUE and ANTI-IMPERIALIST LEAGUE OF AMERICA respond to Sinclair's version below. Eisenstein, back in the U.S.S.R., is hospitalized. 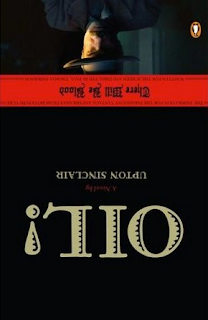 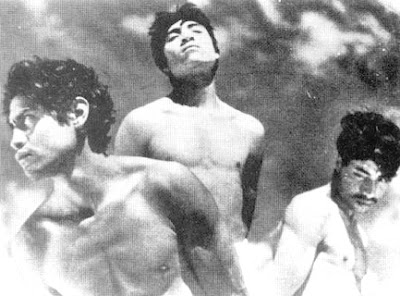 Mexico is NOT a natural paradise where happy people live in peace in plenty!

Mexico is NOT the idyllic picture of "beauty and charm" as it has been described by the sponsors of this film!

Mexico is NOT merely the colorful land of the exotic magueys and majestic Mayan temples. In Mexico the masses are oppressed, exploited and degraded by a military dictatorship whose record of cold-blooded murders and ruthless repression ranks with that of Machado, deposed Cuban tyrant.

The startling beauty of the Mexican land is undeniable, and the Soviet cameraman Edourd Tisse, has succeeded in capturing that beauty in every single and unforgettable foot of this film.


But the Mexican peasants are being driven off this picturesque land by force of arms! Murder bands calling themselves "Liga de Defensa Social," hired by the Wall Street-controlled Calless-Rodriguez government of landowners, plunder and exterminate the peons wherever they offer resistance to forcible eviction from the land.


About these deeds there is nothing either particularly "charming" or "beautiful." No more so than the assassination of labor leaders and suppression of the trade unions. No more so than the wholesale exile of hundreds of intellectuals, workers and peasants to the dreaded "Mexican Devil's Island," Islas Marias.

"THUNDER OVER MEXICO" hails the perpetrators of these deeds and glorifies their existence! HOW? By singing the praises of what it calls "The New Mexico." By showing the peasantry uplifted and "civilized" by the present regime. By asking us to believe that this mythical "New Mexico" is primarily concerned with the welfare of the Mexican people!


No barrage of ballyhoo and publicity can convince us that a director responsible for the greatest films ever made dealing with the struggle of the Soviet masses for emancipation from Czarist oppression and tyranny (POTEMKIN, OCTOBER, STRIKE, OLD AND NEW), could have turned out the monstrous distortion of reality that is the present version of what was once entitled QUE VIVA MEXICO! "THUNDER OVER MEXICO" was not edited by Eisenstein but by Hollywood "montage masters" who completely distorted Eisenstein's original conception of a film that was intended to satirize rather than glorify the present reactionary Mexican regime.


We call upon all movie-goers to demand the withdrawal of this film and the restitution of the original negative to Eisenstein. LET YOUR PROTEST BE HEARD WHEREVER THE FILM IS EXHIBITED. SEND YOUR PROTEST TO STOP THE DISTRIBUTION OF THE FILM!


The releasers of "THUNDER OVER MEXICO" in their advance publicity express the pious hope that their film might be appreciated by they call the "gum-chewing" movie-going audience.


We call upon you, the "gum-chewing" audience to show your appreciation of "THUNDER OF MEXICO" by forcing the film off the screen!


This is a reproduction of a Handbill protesting the mutilation of QUE VIVA MEXICO!. The "gum-chewing" reference is in reaction to Upton Sinclair's statement that he wanted to present a film to which the "gum-chewing audience" could respond.

Today, dias felizes reminds us that JUVENTUDE EM MARCHA (Pedro Costa, 2006), known to us in the States as COLOSSAL YOUTH, will now be known to many more as EN AVANT, JEUNESSE! by its release, at last, in France, February 13th 2008. The delay of the film's release was not willed by the makers of the film. There were problems with the initial distributor.

Kino Slang will soon follow up on this story as reports of the the film's current reception come over the wire.

Let's be optimistic for a moment, and hope indeed that this succession of titles, unintentionally a progression, but beautiful, is taken as a directive: Youth on the march. Colossal youth. Forward, youth!

The film is playing in French theaters, not in the Museum. The cinema is in the cinema. dias felizes has also linked to a terrific text precisely on the question of how and if, from Costa's point of view, it could be anywhere else.

It is a roundtable with writer and Witt de With Centre for Contemporary Art director/curator Catherine David, writer/Museum director/curator Chris Dercon, and Pedro Costa. Now, museums and acadamies often purport to be public, radical places, but no one shifts and leaves works/texts/events behind without a trace as quickly as them, unfortunately. They are untrustworthy in this regard....I recommend saving or printing the text of this roundtable if you are interested in referring to it in the future. Here it is:

From black box to white cube *

*As predicted, the above link died, probably at the same time a low-paid intern or staff member was let go. However, here updating in 2019, a new link is found:

From black box to white cube