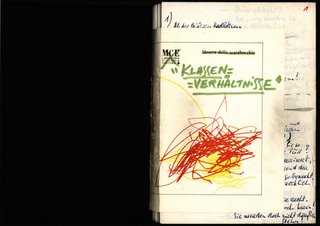 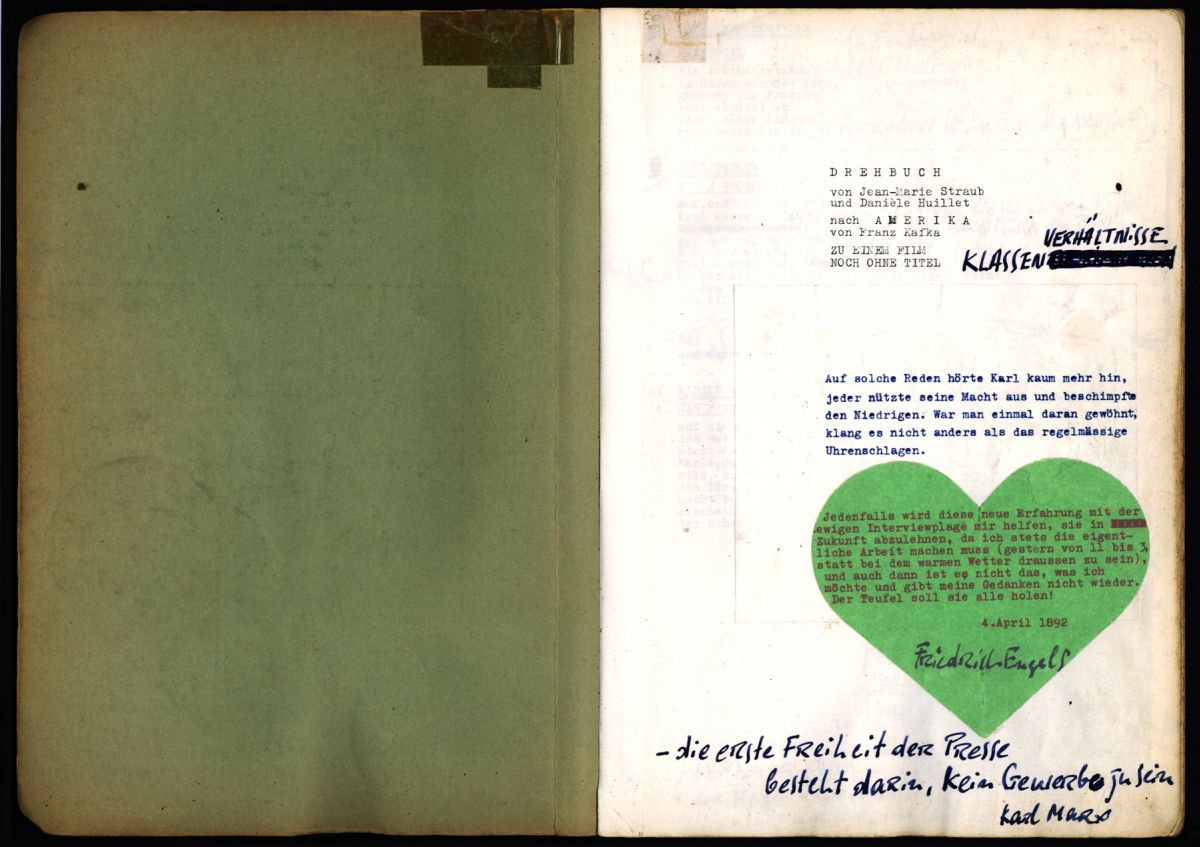 More mammoth and dutiful work on Straub and Huillet (!): the above is from the Vienna and Munich Filmmuseum's DVD Edition of Klassenverhältnisse (Straub/Huillet, 1984). The details of this edition are astonishing: full production documents, a transcription of the press conference, three documentaries on the film and Straub/Huillet, 44 production stills, an entire book by Wolfram Schuette
-- read all the details here .
-- See many of the production documents here .
-- Read the press conference in German here .

A true labor of love and, by all indications, the finest edition of a Straub/Huillet film possible on video -- and suddenly existing. More about the disc once I have it in my hand...

The good acquaintances at Terminal Beach also heralded it and included a link to an amazing piece of writing on Huillet/Straub by Giulio Bursi (in Italian), who has worked with the them for years and made a film of the shooting of QUEI LORO INCONTRI called J'ECOUTE!. You should also see what else Terminal Beach is heralding lately...

Tag Gallagher has re-written his monumental book JOHN FORD: THE MAN AND HIS MOVIES (dialectical cinema) 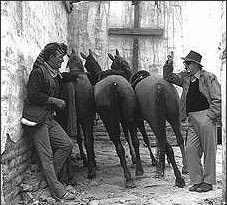 As if this wasn't massive enough, he has made the entire book available for download in pdf form, here: http://rapidshare.com/files/61830908/ford_tag3.pdf.zip .

Tag estimates it is roughly 40% new material, large and small changes, and all the frame enlargements are new. The latter detail is saying quite a lot considering Gallagher is an artist with still frames and their placement.

I was going to write a little something about how much Tag's book has taught me over the past 7 years but this is such a process in motion (as you see!) that it would just be flowery and ill-judged at that.

"I'm not a man...I'm fifty-five years old, have four human children, six human grandchildren, weigh about one hundred and forty pounds; I eat, sleep, scratch myself and hate lice; but I am not a man.

"...I'm the black sheep of Gotham's flock, the whiskey breath of Stephen Foster, the oldest street in the United States, the tea-water pump. I am the Henry Astor of the Fly Market, Priest of the Parish, Murderer's Alley, the Dead Rabbits. I am exaggerated humor, intense filth. I am an accomplished linguist, can hold my tongue in English, Spanish, French, Italian, German, Hungarian, Yiddish. I am the rise of the gangs. I am also a mystery. I am Bowery."...

The filmmakers I admire most today are the Straubs, Abel Ferrara and Eric Rohmer.

Rohmer I met once nineteen years ago. I was in Paris researching Rossellini. I called him from a pay phone and then ran halfway across Paris when he said, "Can you be here in twenty minutes?" I found him sitting in a bare empty office writing dialogue in a student bluebook, without pause or hesitation. He was kind and solicitous and "gave" me Jean Gruault. This incident epitomizes Paris for me.

Rohmer's Spartan simplicity seems somehow connected to an Athenian richness in the human and the cinema, as does the simplicity of the Straubs in even barer quarters. And if Rohmer is Paris, where time is measured, the Straubs are Alsace-in-Rome -- the Rome of thirty years ago, not of today -- where the light is more intense, and makes infinity more attractive than time, in order to get inside the awe of things in Frankish fashion.

This was evident even in New York, when Jean-Marie and Daniele came in 1974 to show MOSES UND ARON and afterwards sat on the floor of our apartment watching 16mm prints of DONOVAN'S REEF and PILGRIMAGE. A good quarter century passed before I saw more of them, and not just them but their films too, which are impossible to see in America, even on video. But in 2001 in Turnin where their work was reprised at the Festival, we resumed the same debates as years before without any sense of interval between sentences.

Eventually I asked, "Have you seen any Abel Ferrara?" They had not. But they knew who he was, even knew that in Paris there are people who say there are only the Straubs and Ferrara. "Well, he says he likes your films," I said, hoping to inspire noblesse oblige. Immediately I was challenged: "Prove it? What did he say?" I panicked.

In fact I had met Ferrara a few days before. I had thought I would have to take a weary bus from the Milano airport to Turin, but had checked yet again with the Festival office on the morning of my flight. Came the reply: "Yes, you can ride with Ferrara whose plane arrives ten minutes after yours."

He lay stretched out in the back of the van for two hours. Another sort of simplicity, equally intense but low key and indirect. Here was New York, or more precisely, Union Square. And, thank goodness, I suddenly remembered that he had actually said some thing about the Straubs. I'd asked him what he liked about them and he'd said --
"What's there not to like?!"


Around us, everyone translated. "Write it down", said Jean-Marie, well satisfied. I wrote it down, feeling like a character in MOSES UND ARON. "Now sign it. And date it." I did. He took the page, folded it into his wallet. That was in November 2001.

Last week I got an e-mail from WinterKlaus in Munchen. He wrote:

"I have just his evening returned from Paris. Monday was the avant-premiere of UMILIATI at the Cinematheque...Jean-Marie announced before the screening, that he wouldn't like to talk about the film afterwards -- only one thing before -- 'You know Abel Ferrara?' Common agreement in the public... 'Well, a mutual friend, Tag Gallagher, once told me that he had talked to him about our films, and Ferrara had said to him' -- then he took the piece of paper out of his pocket that you gave to him during that dinner in Turin -- 'What's there not to like' Then he translated this AF quote, admitted never to have seen an AF film and left. Then he came back and added -- 'At this momnet, as this tartuffe, ce tartuffe de Chirac, allows the American bombers to fly over France for Iraq, I prefer to keep silent. I'm in mourning. Iraq is the cradle of our culture, and this is being destroyed now.'"