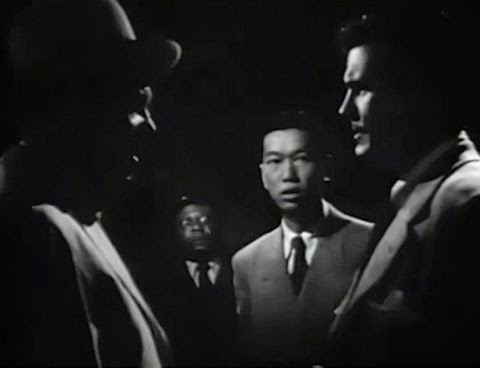 
Phil Karlson is known for a handful of crime films he made in the 50s. That is a tribute to the strength of those films and a disservice to the director, who made over 50 features and won two Emmys for his television work, so the French Cinematheque is putting on the first comprehensive Karlson retrospective ever. (Forty-three films, October 3rd through November 22nd.)

Why so long after the fact? Ironically the impact of the crime films may have hurt Karlson’s reputation. ‘These pictures have been copied and recopied so many times,’ he once observed, ‘Unfortunately Phil Karlson never got the credit for it because I’ve never been a publicity hound.’ Shame, modesty or self-preservation? Karlson’s films have had their political detractors, while the crime films have been damned and praised for their violence.

Initially Karlson was a left-wing filmmaker who liked filming in natural settings. His black-and-white crime films were made during five years at the height of McCarthyism. Emerging from that dark passage, he consigned his gangsters to tv and replaced them with juvenile delinquents, surfers and even stranger ‘gangs’ during the Vietnam years, although the paranoia induced by the witch hunts never receded. ‘We’ve all had to make compromises,’ Richard Widmark’s sold-out Cold Warrior says to the Hungarian freedom fighters who just beat him to a pulp in THE SECRET WAYS.

Karlson once said in an interview that he liked having three acts in a movie, omitting to stipulate that each act should be completely different from the others. This the first rule for understanding the most mysterious cinematic signature of the postwar era, and it applies to that signature’s surprising history too. Just leave your preconceptions about Phil Karlson, that phantom, at the door.

Born in Chicago in 1908, Philip Karlson, nee Karlstein, was half-Jewish and half-Irish (cf. THERE GOES KELLY). His mother was an actress from the Abbey Players in Dublin who became a star on the Yiddish stage in America. He inherited her artistic bent and studied painting at The Chicago Art Institute, but his father insisted he get a law degree at a California college. Doing odd jobs at Universal while studying, he rose through the ranks assisting on films ranging from Abbot and Costello comedies to A pictures with Marlene Dietrich.

We lose track of him between 1941 and 1944, when he reappears with A WAVE, A WAC AND A MARINE, his first film as a director and the first of fifteen films he made for Monogram, the B-movie company to which Godard dedicated BREATHLESS. Anonymously produced by Lou Costello, Karlson’s Brechtian clown-show about the relationship between Hollywood and the war soared over the heads of Monogram’s rural audiences. So instead of making THE BEST YEARS OF OUR LIVES and DETECTIVE STORY, he would make KILROY WAS HERE, about a man haunted by a ridiculous wartime phantom, and THE MISSING LADY, a dirty Borgesian romp where the characters occasionally use the camera as a mirror to check their appearance.

Monogram took the name Allied Artists for the first time to distribute BLACK GOLD, which Karlson filmed for a year on location between shooting cheapies in Hollywood to get the colors of the seasons right. The company took the name again to release PHENIX CITY STORY, becoming a powerhouse independent after that success, then another true story, HELL TO ETERNITY, in 1960. Only the studio where Karlson learned how to throw in a burlesque number to keep the second act from flagging would release a film where Act 1 is the internment of Japanese-Americans, Act 2 an orgy in Honolulu, and Act 3 the mass suicide of Japanese soldiers at Iwo Jima. During Act 2 Karlson’s camera, in the midst of war, tracks the libidinal currents in a room the way John Cassavetes would in FACES.

The last film Karlson made for Monogram before the start of the Cold War was LOUISIANA (1947), starring the Singing Governor, Jimmy Davis, and a rainbow of Southern musicians playing themselves and filmed in the locations where Davis had risen to power from a sharecropper’s cabin. Besides inventing the form Karlson would use in PHENIX CITY STORY, LOUISIANA introduced him to the South, a rich terrain for correcting the commercial miscalculation of A WAVE, A WAC AND A MARINE.

This was accompanied by the switch to location filming in natural settings for BLACK GOLD, then in the programmers Karlson made in the 50s, often for independent producer Edward Small. In the 50s westerns the exuberant colorist’s palette darkens into the shades of film noir, while he indulges his love of Technicolor with romances set in the past but haunted by the same contemporary themes: conspiracy, men framed for treason, spies, imprisonment, the third degree, secrets passed to the enemy and other facts of life during the Red Scare.

Karlson’s scenes of sudden violence are already above and beyond the call of genre – there’s an out-of-frame castration in THE TEXAS RANGERS! – although he learned at Monogram that less is more and never forgot it: a hat repeatedly knocked off, a sweater or petticoat ripped (KEY WITNESS, A TIME FOR KILLING) can be as jolting in the hands of a master as torture or rape.

The violence escalated in the 50s, climaxing when the head of the Production Code Office wrote a letter after Allied Artists ignored five memos from his staff, asking ‘as a personal favor’ that ‘the shot of the tire rolling over the little Negro girl’s head be removed’ from the PHENIX CITY STORY script. But while the Code had kept Karlson from reenacting Huey Long’s assassination in LOUISIANA, now he would show the assassination of a political reform candidate in chilling detail, with the actor wearing the dead man’s clothes.

The heroes of Karlson’s crime films make a stand to rally the community to the Law – they are opposed to vigilantism. Lynchings were on the rise in the South because of the civil rights movement, and Karlson had been a militant anti-racist since BLACK GOLD, where he told the true story of a horse owned by Native-Americans that won the Kentucky Derby, and added a Chinese jockey for good measure.

The shadows that enfold KANSAS CITY CONFIDENTIAL and 99 RIVER STREET are replaced by the sunbleached surfaces of the Alabama city where the Army battled the Mob in PHENIX CITY STORY, and that Sunbelt Noir look was kept for crime films made on location in Miami, Reno and Los Angeles. While those films are fictions, they scooped the A-picture competition on PTSD (5 AGAINST THE HOUSE), police torture (KANSAS CITY CONFIDENTIAL) and witness sequestration (TIGHT SPOT). Later Karlson’s brutal actioners (particularly BEN, the sequel to WILLARD) would hold a mirror up to the impact on America of the Vietnamese War of Liberation.

Who is Phil Karlson?

To interpret this sinuous path we have to go to the films themselves, because Karlson moved through six decades of Hollywood history without leaving many traces, while assembling a cadre of collaborators and a galaxy of performers that makes Six Degrees of Phil Karlson the movie trivia game for the new millennium.

Another cloudy portrait can be assembled from all the material memes – gadgets, tricks and gags – that recur without ever becoming themes. The geek in Karlson demanded real gadgets for his Bond parodies when the opposite would seem to be called for, but the modesty of the portable helicopter that is assembled and flown in THE WRECKING CREW makes its own comment on the competition.

Our man loves technological progress, especially in the media. Telephone and radio; telegram and teletype; tape recorders; computers; television (and telethons!); phone tapping and surveillance screens are deployed as tools for the characters to communicate with, no social comment intended. The cinema of an artisan who doesn’t want to be known as an artist.

Whatever he was doing during the war, this born filmmaker saw CITIZEN KANE and used brightly-lit deep-focus sets with white walls in his first film, which pits the entire Jewish burlesque tradition against the influence of Welles. Without abandoning his love of comedy teams and black music, Karlson subsequently identified with Welles’ master, John Ford (the Irish blood), and made THE BIG CAT (‘my answer to THE GRAPES OF WRATH’), which supplied the template for powerful social melodramas like GUNMAN’S WALK and THE YOUNG DOCTORS. After conquering the majors he returned to independent production and the landscapes of the South for WALKING TALL and FRAMED, and they made him a wealthy man.

The formal system he invented at Monogram took the ostentatious use of deep focus (for example, young Charlie Kane seen through the window in the snow) and made it invisible by creating a little hole in the image, usually directly over the vanishing point, to isolate a piece of the background. Menaces, sexual opportunities, icons, paintings, phantoms, obtuse senses – an endless array of objects appear in The Hole. Its little music helps reduce the need for shot-reverse shot editing (that famous Karlson ‘speed’) and summons up a camera that becomes a mirror for the characters (literally in THE MISSING LADY, THE BRIGAND and THE BROTHERS RICO) in the offspace it projects.

This means Karlson’s films are documentaries about their stars (Leo Gorcey, Thunderhoof, Dean Martin) made in complicity with them (Anthony Quinn and Katherine DeMille acting their marriage, Kay Francis playing a contented lesbian, Richard Widmark doing comedy, Dennis Hopper spouting poetic jive talk, Patricia Owens stripping). Sometimes the painter puts Hollywood fauna like Brad Dexter and Evelyn Keyes, or a big cat, next to the star to make the portrait more lifelike, and the mirror also captures magical presences: Sabu at 39, Ginger Rogers at 44. But a mirror leaves no recollection after we see ourselves in it, so Phil Karlson passed through Hollywood without being seen or remembered, until now.


My thanks to Andy Rector, Aaron Graham and the late Michael Henri Wilson, PHILologue extraordinaire.