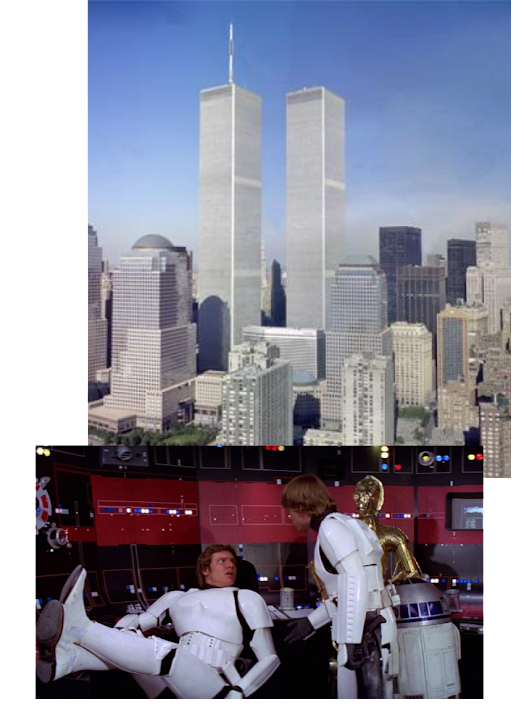 In pursuing the implications of the exceptional success of Star Wars and its huge appeal to filmgoers of all kinds, one ought not to lay too much stress on the film's status as 'science fiction'. For a long time science fiction has been the generic repository of fear, madness, disaster, paranoia, of the speedfreaks and depressives. All are absent from Star Wars, in the genre's finest authors (Dick, Ballard), the future is only secondarily the place of adventure and escape, distraction and entertainment; the genre's best films (2001 for example, but also Lucas's very interesting THX 1138) do not particularly offer themselves as 'modern fairy tales'. It's pointless to labour this.

Star Wars would rather be 'a romantic, confident, positive vision', atemporal, universal and of course unanimist — but a new kind of unanimism [1], one no longer concerned with some or other strategy of tension, no longer that of a necessary common front against an enemy within and/or without (disaster films like Jaws), but one which derives from a freely felt consensus, being dictated neither by the law of necessity, nor by a pronounced imperative or any kind of reason, without shock, jolts, fear or surprise but with pleasure and confidence. The encounter with science fiction in Star Wars, the fact that the action takes place in a science-fiction universe, doubtless permits such confidence to be retrieved and projected towards the future, a future offering immediate ideological benefit. But above all, the reference to science fiction has the immense advantage of allowing the creation of a fluid fictional space, without apparent anchorage, one that enfolds and solicits: something like the pacific and pacifying American Mother who gathers to her bosom, with all the soft technological refinements that are hers, all that the bellicose uncle (a certain Uncle Sam), because of the brutalities of his war machinery, had excluded. Young people, the hippies, counter-cultural figures were basically rejecting this childish make-believe. Now we are witnessing the full-scale return to the territorial waters of former years, to a floating mass with fluid contours, without frontiers; it's no longer 'to hell with frontiers'. Everyone is invited to play as before with what Welles called 'the biggest electric train set in the world' - the cinema, Hollywood — as a family (like on television), under the calm, honest eye of a mother ever-vigilant over morality (the moral). The America of President Carter? But in such a film it is also capital that talks.

Lucas comes from the ranks of those we used, some time ago, to call nostalgics, pessimists, depressives, and we now know that they were right to be so. It is also men like him who find themselves now entrusted with gigantic projects (like Star Wars) in the general fight against depression, and they certainly do this with the same eagerness with which they struggled against repression in the previous decade. There has been a sea-change (if not a change of base) in America. This is a period less of rebellion against the symbols of repression, more of a determined recharging of flat batteries — through the artificial injection of a lost imagination. The question is: what imagination? It is no easy matter to rediscover it. For a film-maker like Lucas, barely thirty years old and finding himself of the post-Westerns generation, the solution resides in a return to childhood; more precisely, in a return to the conditions of his childhood and the cinema of easy-going adventure movies in which he was cradled. Because of the lack of the 'positive' [2], in the available contemporary imagination (above all in science fiction), the solution is seen to lie in a synthesis of old forms. The problem, therefore, is technical; it is enough to return to the terms and themes of this cinema (those in fact brought out by film studies) and make them more sophisticated, dress them up in special effects, present them as signs to be recognized, decoded. 'Heroes as independent as they are enterprising, irredeemably evil bad guys', 'the triumph of good over evil', etc.

From this point it is a matter of making the screenplay scientifically conform to this program, following the computer logic which translates its question-signs into response-signs. Equally, story, characters, actors don't in themselves have great importance: they are there simply to attest to the intentions of the screenplay, they are the supports of these intentions. This is what gives the film its coldness (not an aggressively dry coldness; the film is more cool than cold) and the feeling that everything is already played out in advance (in contrast to the adventure films already referred to) and that the events are only detours in a standardized plot. You very quickly get the impression of a constant interchangeability (as with those standard parts of a machine which can be replaced by an identical part), and it is soon impossible to see Princess Leia Organa as anything other than 'the impeccably brave heroine' of the advance publicity, or to nod knowingly when the cliches of the Western crop up in the scene in the city of Mos Eisley, or to do more then see Peter Cushing as the sign of absolute evil because of his numerous shady dealings with Dracula and Frankenstein [3]. A reading without risks that rapidly becomes monotonous (one could also see the wheels turning in Jaws, but there were nevertheless a few moments when the film carried the audience with it, a few troubling passages).

And the whole thing (the vast apparatus of Production-Direction-Distribution), whilst functioning admirably (in the packed cinemas at the end of the film we applaud the heroes when they enter the royal hall on the planet Yavin, at the same time as the enthusiastic crowd on the screen), leaves the lover of fiction hungry for more; but logically so, for the fiction of Star Wars functions like nothing so much as a user-friendly computer in perfect working order [4].
One way or another, fiction requires passion; there is no great fiction without great passion and no great film without there being a great love story behind it. This is what differentiates the cinema from other media such as the comic strip, which gets by very well without it, or television, which serves here as the model of cinema (and perhaps is the key to its success). Like Inspector Kojak in the American television series, the heroes of Star Wars are not impassioned types; they act intuitively and are utterly disengaged. The passions that they come up against are fleeting and comprehensive, and without consequence. Rivals co-exist, calmly: an unthinkable state of affairs in the old adventure films where the rule was, in Gresham's Law [5] of Hollywood fiction, that the hero chased the other man. In the fiction of Star Wars one finds the binary system which is the working practice of capitalism today: two heroes, virtually equivalent (and in the princess's heart, as strictly equivalent as the Twin Towers of the World Trade Center in the heart of New York), and incredibly, deliberately desexualized [6].

The fictional system of Star Wars echoes the intense participation and great lethargy, deep involvement and great indifference that belong to the consumption of television. Where it all happens or in what historical period is immaterial; as is whether the young protagonists love one another or not (and whether the princess loves either of them); sex has no importance, nor does violence; nor even the dedicated totalitarianism of the 'Empire' (its nature, and what is implied by that); nor the death of Ben Kenobi (the old patriarch played by Alec Guinness). Everything is and is intended to be deliberately abstract, presenting itself as principle, postulate and conventional indicator and never the motor, dynamic force or launching pad of fiction.

Star Wars therefore breaks with the cinematic mania that in recent years has pushed films beyond any previously conceivable limits, towards extreme violence, hard pornography, disaster movies; the mania for bringing everything into the open in order to provoke a strong emotional response and a bellicose unanimism. In Star Wars all heterogeneity is admissible, all alterities and differences can be present, functioning in perfect narrative harmony, provided that all this takes place in the absence of sex. So the problem is resolved at its very root, if one can put it like that: no more sex, violence, passion, or even fiction, only cohabitation, intrigue, aloofness (such is the fate of these aloof heroes). Finish with sex and you finish with the risks of conflict, violent emotions, the force of fiction. No matter, the 'force' is elsewhere, as the film's poster ('May the Force be with you') puts it.

It is the quiet force of capital that has produced the film with remarkable economy; one precisely matched in the shooting and the special effects, in line with the film's ambition and budget [7]. It is a knowing film that renews the Hollywood spirit of wanting films to be in some way edifying; here, in what replaces fiction, is the film's whole concept.

This approach is one that has nothing in common with Kubrick's in Barry Lyndon where, for the battle scenes, he used long lenses to film thousands of extras as if he had only thirty, in story terms a pointless expense. Such is the twilight (noted by Oudart) of the Hollywood machine, clouded over by a crazy imagination which gives way to this calm and starry sky where technique triumphs over imagination; like all the rest, fed through the synthesizer. The story of the film's production would constitute a real science-fiction subject that would make one shudder.

1. 'Unanimism': a literary movement, concerned with an idealist notion of the collective, which flourished in France after the First World War. Its adherents included the writers Jules Romains and Georges Duhamel.

2. In fact it is wrong to pretend that the adventure film had disappeared from the screens (for some time it had worked mainly on the principle of the shock effect), and even Lucas's childhood had not been one surrounded completely by reassuring mythological spaces. There is a Golden Age ideology in Star Wars, a rewriting of cinema's history, just as the auteurs of the Western were rewriting American history.
(Author's note.)

3. In the Terence Fisher films in question it is not so simple. Evil cannot just appear, it must be imagined as such on each occasion. In these films it is never a matter of a primitive accumulation, even if they are sometimes thought of as sequels to one another. Star Wars is happy to grind out the effects that cinema (American cinema) has taken years to build up, and reduces the great cinematic myths (the adventure film in particular, but not exclusively) to narrative references, to the status of road signs. A sad fate, and a strange gift to the children. (Author's note.)

4. Kubrick has shown that even a computer can fictionalize better than this, if you take the trouble. One recalls the awful chess game with the computer in 2001: A Space Odyssey: the cosmonaut who plays poorly and who strips the computer's electronic brain, provoking in the victim an uncannily human moan. (Author's note.)

5. Gresham's law is the economic theory that bad money drives out good money.

6. This is all the more extraordinary if one recalls that in THX 1138 the two heroes were revolting against a world without either affective or sexual love, and that this was the motor of the fiction. (Author's note.)

7. In fact, the production costs of the film were remarkably reasonable ($9.5 million) compared to recent productions of the same type (King Kong [1976], for example), and considering the technical inventiveness which had to be demonstrated: the 360 special effects (most of them never seen before), the John Dykstra workshop, the two thousand units of sound on the soundtrack, etc. (Author's note.)
* 5:30 PM No comments: