The effort to publish and re-publish more of Jacques Rivette's writings must intensify. It is not right, a world without Rivette... it need not even be.

Prior to the first public showing of Truffaut's first feature, this Rivette article appeared...


Les Mistons was all right; The 400 Blows is better. From one film to the other, our friend François has made the decisive leap, the giant step toward maturity. It's obvious that he's not wasting his time.

With The 400 Blows, we return to our childhood as we would return to a house that had been abandoned since the war. Our childhood (even if it is first of all a question of F. T.'s childhood) means suffering the consequences of a stupid lie, and involves humiliation, the revelation of injustice, abortive attempts to escape—no, there is no "sheltered" childhood. Speaking of himself, he seems to be speaking of us, too: this is the sign of truth, and the reward of real classicism, which knows how to limit itself to its object, but suddenly sees this object cover the whole field of possibilities.

For reasons that might be guessed, autobiography is not a genre that is very widely used in films. But this should not surprise us as much as the serenity, the restraint, the evenness of voice with which a past that parallels his own so closely has been evoked here. The F. T. that I met, with Jean-Luc Godard, at the Parnasse at the end of '49 or at Froeschel's or the Minotaure, had already done his apprenticeship for The 400 Blows; I swear we talked more of cinema, of American films, of a Bogart movie being shown at the Moulin de la Chanson than we spoke about ourselves, or else we merely alluded to our personal lives: that was enough. Or a snapshot produced suddenly would reveal what F. T. looked like three years before, at a shooting gallery, dazzled by the lights, pale, a smaller-sized Hossein, with Robert Lachenay leaning against his shoulder; or would show the three ritual rows of schoolboys in a fossilized class photo. This mixture of vagueness and sudden enlightenment came finally to seem like real recollections, real memories. I'm almost sure of that now, for I recognized or rediscovered everything on the screen ...

I should like the reader to really see my point: this film is personal and autobiographical, but never immodest. There is no exhibitionism of any sort here; Even prison is beautiful, but with a different sort of beauty. F. T.'s strong point is that he never directly speaks of himself, but instead patiently dogs the footsteps of another young boy (who perhaps resembles him like a brother, but an objectified younger brother), yields to him, and humbly reconstructs from personal experience a reality which is equally objective, and which he then films with absolute respect. Such a method of filming has a very fine name (and too bad for F. T. if he doesn't know what it is): its name is Flaherty . . . [One example] of the truth that can be attained by this method, and of the truth of the film in and of itself, is the admirable scene with the woman psychologist—which would have been impossible, incidentally, under the outmoded methods of shooting that people go on insisting we keep . . . Here, the dialogue and the direction emerge with all the truthfulness of "live" shooting; the cinema thereby reinvents television, and television in turn consecrates it as cinema; there is no more room here for anything except the admirable last three shots, shots that are pure duration, perfect liberation.

The whole film mounts toward this moment, and little by little sloughs off time in order to rejoin duration: the idea of length and shortness that so haunts F. T. seems in the end to have hardly any meaning in his case; or perhaps on the contrary it was necessary to have such an obsession about length, about temps morts, such an abundance of cuts, of jerks, of breaks that eventually he could get rid of the old clockwork time and rediscover real time, that of Mozartian jubilation (which Bresson seeks too desperately to ever recapture)...The 400 Blows also represents the triumph of simplicity.

Not from poverty, nor from a lack of invention, quite the contrary: but he who from the beginning places himself in the center of the circle, has no desperate need to seek to square it. The most precious thing about film, and the most fragile, is also what keeps disappearing day by day under the reign of "clever" filmmakers: a certain purity of gaze, an innocence of the camera which here seems never to have been lost at all. It is enough perhaps to believe that things are what they are to see them simply exist on the screen as they do in life; can this belief have been lost by others? But this eye and this train of thought opening on the very center of things represent the filmmaker's state of grace: to be inside cinema from the outset, master of the heart of a domain whose frontiers can then extend to infinity: and to this we give the name Renoir. I might also stress the extraordinary tenderness with which F. T. speaks of cruelty, which can only be compared to the extraordinary gentleness with which Franju speaks of madness; here and there, an almost unbearable force results from the constant use of understatement, and the refusal of eloquence, of violence, of explanation, giving each image a pulse, an inner quiver, that makes its mark in a few brief flashes that gleam like a knife-blade. We could speak, quite properly, of Vigo, or of Rossellini, or even more pertinently still, of Une Visite or Les Mistons. In the long run, all these references don't mean very much, but we must hurry and make them while there's still time. I just wanted to say, as simply as possible, that there is now among us, not a gifted and promising beginner, but a genuine French filmmaker who equals the very greatest, and his name is François Truffaut. 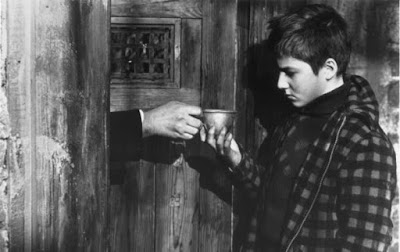