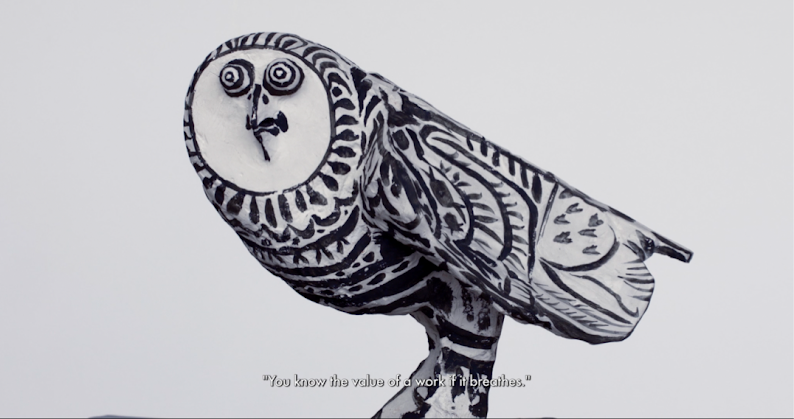 A Glimmer of Candlelight: Peter Nestler’s Picasso in Vallauris

Less than a month remains to catch Peter Nestler’s new film Picasso in Vallauris (2021, 47 minutes) during its current online run, which began September 25, 2021 and ends January 30, 2022, made available internationally and for free by Museum Ludwig, Cologne. The film was commissioned for an exhibition titled “Picasso Shared and Divided: The Artist and His Image in East and West Germany”, curated by Julia Friedrich. The exhibition is concerned with Picasso’s presence (and memory) in the two Germanys, however this is not the subject of Nestler’s film; instead, Nestler examines by way of a lyrical and peacefully-paced essay, Picasso’s period in Vallauris, a communist-led commune located in the Cote d’Azur region of southeastern France, with special attention to the words and images of people who remember him, as well as to the work in ceramics and painting that he produced during this time. While Luciano Emmer’s 1954 film Pablo Picasso a Vallauris was made when Picasso was still living in Vallauris, Nestler’s Picasso in Vallauris, filmed in the first weeks of 2020, takes the spectator to Vallauris today and looks back to Picasso’s time there (1948-1955) but also forward to the following generations of future artists who, as we see in the film, are still children.

Picasso in Vallauris is loosely divided into two parts, with a suggestive prologue and a beautiful and unexpected epilogue. The film begins suddenly, without credits or music. The first thing we see is Picasso’s La Minotauromachie dedicated to Paul Éluard and his wife Nusch and signed by Picasso in 1936. On the soundtrack, we hear multiple voices; Nestler himself, as well as others who will provide a textured and collective narration to the photographic archives, letters, citations, and commentary that will be presented throughout the film. Éluard, we are told, was like a brother to Picasso. From the beginning we understand that this is not a conventional documentary on the world’s most famous painter: Nestler’s film will be affectively guided by the voices and images of those who were close to Picasso and who shared a common history with him. Unlike other films on the artist, this film is not only concerned with the man, but with the landscape, the ruins, the artifacts, and with what remains from this period in present-day Vallauris. 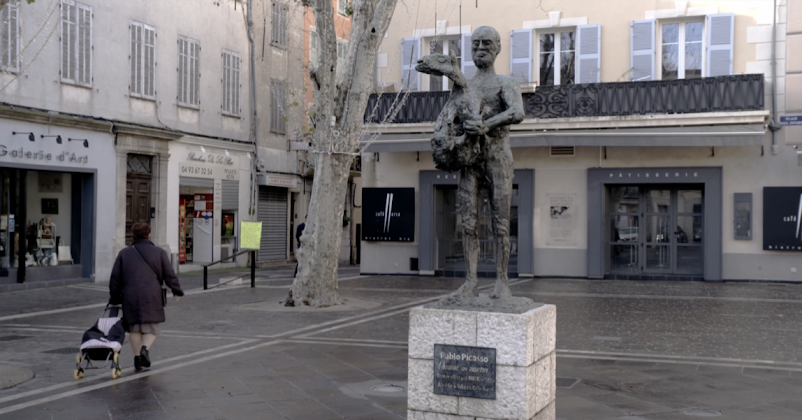 L’homme au mouton,
a gift to the town of Vallauris
1949
The first part of the film is concerned with the beginning of Picasso’s period in Vallauris starting in 1948, where he initially went to study pottery with Suzanne and Georges Ramie. He discovers the essential consistency of pottery, in relation to painting, including the observation that while in painting, the colors will gradually change over time, in pottery they remain the same. It is here, in Vallauris, and with the art of ceramics, that Picasso is revived as an artist. Nestler’s film borrows some shots from Emmer’s Incontrare a Picasso (1954), including a magical scene where Picasso transforms a ceramic vase into a peace dove in just a couple of minutes. Here every archival image becomes an archeological artifact that leads to an opening and a new discovery. For instance, a photograph by Robert Doisneau of Picasso with four-finger-shaped bread leads to a comment on Picasso’s ability with his hands—essential for any ceramist. This section of the film includes hypnotic images of local ceramists (the Crocianis family) working with their hands in Vallauris today, as well as beautiful photographs of Picasso with his family by Brassai, and of the artist at work by Edward Quinn. 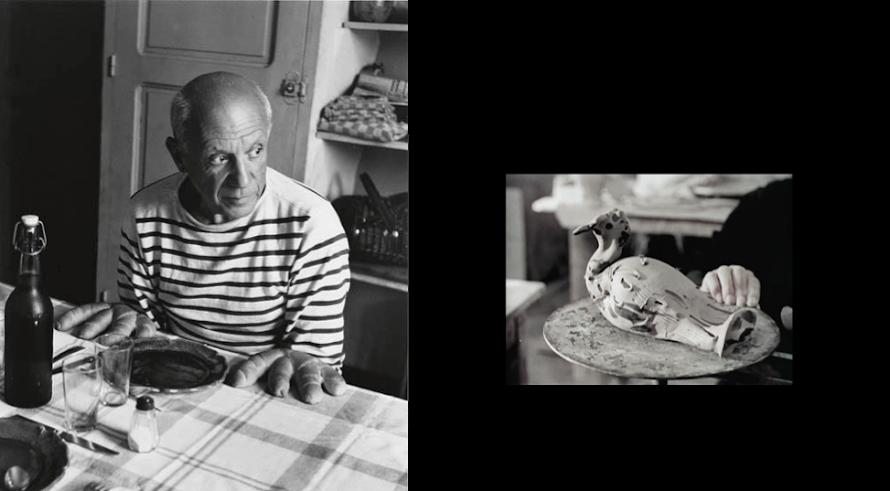 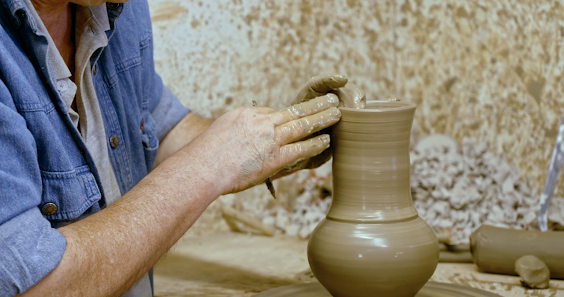 In the second part of the film, Nestler takes us into Picasso’s mural War and Peace, one of the major artworks made in the second half of his period in Vallauris. The mural was produced for an abandoned castle’s chapel vault which Picasso wanted to transform into a “temple of peace” and a symbol of protest against war. Nestler shows us the mural in different ways. First, filmed with a diffused iris effect around the image, produced by a flashlight or lantern perhaps, following Picasso’s wishes that it be seen as if by candlelight. This allows us to look at details first. Then we see the mural again but without the iris: several widescreen slow pans and tilts across the work, allowing us to see the details in relation to the rest of the mural. Then we see details of the mural again, well-illuminated. These details allow us to see the materiality of the mural itself, including the divisions in the fiberboard panels. This texture adds new meaning to the images. Nestler’s voice over provides a beautiful commentary on the images, adding to what we see. He points out, for example, “the vulnerable owl”, a figure that we have seen in Picasso’s life and work from the beginning of the film. Finally, we see the images again, a fourth time, through the sketches that make up Picasso’s studies for the mural. “Doing so many studies is the way I work.” These several layers of seeing provided by Nestler allow us to explore this work from different perspectives. 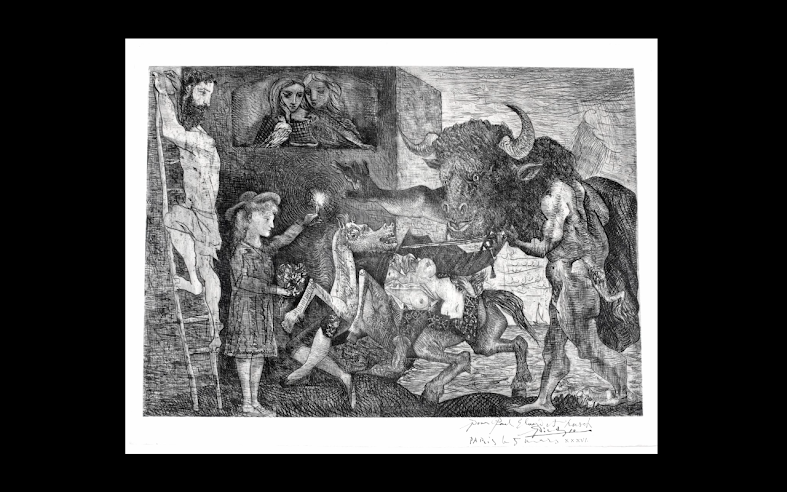 In the final epilogue, Nestler films a group of young children in a drawing class taught by two young women, everyone silently working away in concentration. Whispers are heard here and there of children borrowing colorful pencils and markers from each other. We see and hear the silent discipline of children diligently working. Nestler’s voice-over commentary also goes quiet. As the camera tilts up from one of the artworks, we see the artist: a little girl with an owl on her shirt, in a wonderful gift of chance.

Picasso’s life, work, and passion has one significant counterpoint in the film: a collection of brief moments where Nestler comments on other artists, friends, and contemporaries who did not survive the war. His earlier period in Vallauris, for example, was the worst of the Occupation in Paris. His friends had to hide from the Gestapo, including Max Jacob, who died in the Drancy camp near Paris, before he was even transported to Auschwitz. In another moment in the film, without an explicit connection to the rest of the narration, we are told of Pierre Daix, a journalist and book author in the Resistance, who was arrested, tortured, and sent to Mauthausen. “He is one of the survivors”, says Nestler. But many did not survive. One of these is Pierre Chalmette, former mayor of Vallauris, killed by the Gestapo on August 15th, 1944.
The life and work of an artist, in counterpoint to the cruelty and injustice of war. Nestler does not allow us to get swept up into Picasso’s success and genius, of which so much has already been said. We see that his work is, in the first place, work. His painless stroke of the paintbrush makes it look easy but we know that many hours of study, research, and pain are behind each gesture. War, fascism, injustice, are not just realities of life that have gotten in the way of the work of artists; they also shape artists, giving them, oftentimes, their subject. Art is a way to respond to war, “as an offensive and defensive weapon against the enemy”, says Picasso. When we see the children, their diligence and concentration, their pleasure in drawing, in creating in silence, we are left with the inevitable question of what will one day interrupt their practice, what will their subject be? Meanwhile, they must continue to work, they must keep practicing, they must keep exploring line and color. There will be time for war, for unrest, for the pain of watching others die before their time. For now, they draw themselves as a beautiful girl in a red gown, or in a bicycle race; or a simple row of nice houses and a street lined with colorful rabbits. For now, we/they must learn to work. From their work, one day they will find an answer to that which has not yet occurred.

Picasso is referenced as saying, “Throughout the history of painting, you will find that there are 20 subjects, at most. A subject is something universal. It inevitably embodies an important phase of human development. Birth, suffering, death: those are major subjects”. Despite the fact that there are limited subjects, Nestler has found a way to shine a light (a candlelight) on subjects we are already familiar with: life, war, survival, death, and the subject of Picasso himself. Nestler makes the subject anew through his attention, his research, his work. The editing of archives — still photographs and films, quotes from different people who met Picasso at the time (the potters, the village baker) and two complete Éluard poems (the “chant dissident” titled “Bêtes et méchants” [The Stupid and the Wicked] and “Les Belles Balances de l’Ennemi” [The Enemy’s Beautiful Balances], both wartime poems published in 1945) —, the coming together of these materials appears as natural, as effortless as Picasso’s brush stroke painting his peace doves, from wings to tail to head to olive branch. But the work is there; like Picasso, Nestler has prepared for this his entire life. The result is nothing short of perfection. 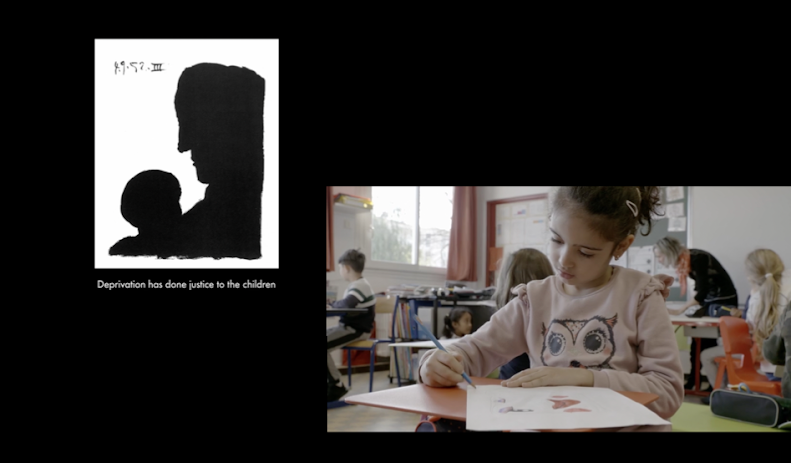 
To see the film on vimeo:
https://vimeo.com/601697031/ab2a0e91c0?
Museum Ludwig page about the film:
https://der-geteilte-picasso.de/en/exhibition-part/picasso-in-vallauris/
About the Exhibition:
https://www.museum-ludwig.de/en/exhibitions/picasso-shared-and-divided-the-artist-and-his-image-in-east-and-west-germany