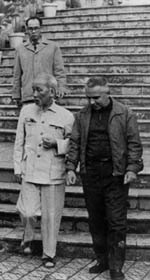 « There it is! This is the slow motion we find in Peckinpah, if you will... It addresses the crowd of spectators only by exploiting something that it lacks. It seems like what Welles talked about: a gimmick, a trick, a gadget. Something that's now usual in all these American directors, even in Kubrick, who disappoints me because he has more talent than them. And this is just Peckinpah, if you will... with the exploitation of Vietnam. To his film I wouldn't go because I wouldn't see the Vietnamese, or God knows in which form. They were there. You just needed to go there... He doesn't see them. Something's missing. Kubrick's film misses what America also missed. They keep showing... In war films about Germany, there's not one big Hollywood actor that hasn't, sooner or later, played a German general. Here no one has played a [Vietnamese] general, cause they didn't know how to do it. That's their shame. To cover up this shame with a slow motion, whatever talent one has, it doesn't work... Let see the Alvarez slow motion. We see a crowd that cries. And we see each one cry without privilege, despite being privileged. The spectator can make his choice. This is what never occurred...Here is a war movie made by a Cuban. It's sufficient to see this to, when we show Kubrick's images see that they do not hold... To say good or bad things... I, (...), it wouldn’t come to my mind to make war; I've deserted in two countries. But it's necessary to watch. We see something in which we believe and there he [Kubrick] doesn't believe in films anymore. He forces himself to believe. And at a certain point it doesn't stand. There's a minimum of honesty... We see that the other [Alvarez’s], which is made of documentary, is so worked by a stylised fiction like this, that it gives back something. And there [Kubrick's] lacks the documentary approach. »
* 9:06 AM

Just to say this is a very quick translation, surely full of mistakes. Please condescend.