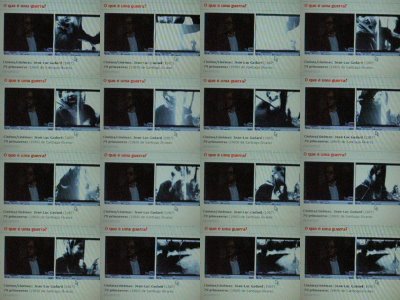 I stumbled upon an extremely interesting cinema blog while searching for references to Jean-Claude Rousseau. It is in Portuguese and seems to be a "discovery" type of blog, taking frequent note and quotation of Cinemateca Portuguesa screenings (though it's much more than that, for instance theoretical as hell, as a babelfish translation of a piece on video vs. film has just indicated to me). It is called Ainda não começámos a pensar and it looks to be run by someone called Andre Dias.

It is where I found the Cinema cinemas clip of Godard comparing Kubrick and Alvarez, Full Metal Jacket with 79 Primaveras (pictured above as it appears in dual-screen sequence on the blog).

Andre has also posted several beautiful videoclips on youtube (most of which have been put to use on his blog):

ps- wanting to link to Andre's blog motivated me to finally build a list of links (below my profile). To be updated regularly.