"I do it because some of the younger people must know..." -Huillet 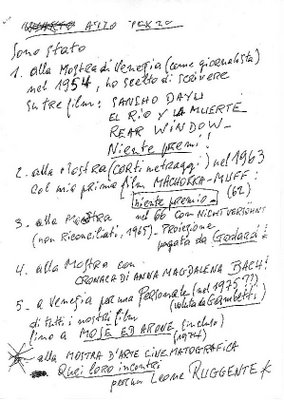 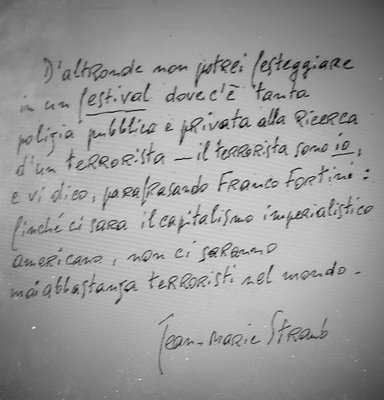 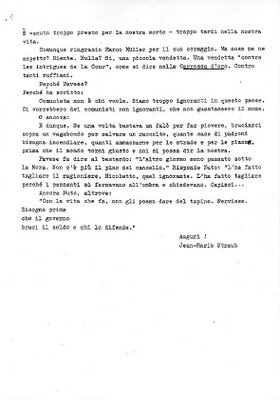 --facsimilies of Jean-Marie Straub's "Three Messages" to the Venice film festival, in his absence. The center handwritten sheet is translated in my previous post below. A complete english translation will be posted or linked to shortly. As for actual english language reportage, critique, or analysis of the film itself (QUEI LORO INCONTRI aka The Meetings), we may have to wait some time for that. This is the only english report on the film that I know of, by Reuters; blissfully ignorant and somewhat ostracizing.

The last typewritten sheet above deals with "Why Pavese?" (QUEI is based on the last five dialogues of Pavese's Dialogues with Leuco) and, like the films of Straub/Huillet, consists of small sections of text that express singular outrage (Pavese was perhaps even more singular and alone than the Straubs in his communism) at "how the world goes", in the words of one member of the cast. Nothing is "little" in what the Straubs do, from the equality of things in their films, from shot to shot, to a "little" passage in Pavese tossed at the immodest atmosphere of a film festival (the cutting down of a pine tree because tramps were getting shade and begging there, quoted in the 3rd message above) or Vittorini (a dialogue on ricotta in their film OPERAI, CONTADINI) -- feeling as a weapon.

The urgent handwritten note or dedication is integral to Straub/Huillet. In fact they have a long history of side-propagation at festivals and public events. Handing out provocative leaflets (to get MACHORKA-MUFF seen against the wishes of it's producers), passing notes, verbally dedicating a film to the Vietcong at a certain screening ("that morning we saw in the newspapers that the bombing of Hanoi had begun again, and we said simply, at that moment, showing the film to those people, that the film was dedicated to the Vietcong."), tacking up flyers saying "This film was turned down by the Selection Committee of the Cannes festival" (says Huillet, "If I feel I must say this about the Cannes festival, it's not out of revenge or to rock the boat in any way. It won't rock anything at all; I do it because some of the younger people must know...")

And because nothing is little and the letter is handwritten, or typewritten, rather than word processed, and because the Straubs began their very first film MACHORKA-MUFF with a handwritten note ("No story; a visual, abstract dream") and have since filmed many other handwritten notes -- dedications to Holger Meins (who died on a hunger strike in prison as a suspected Red Army Faction terrorist), or to "Barnabé the cat"... for the connection between everyday life, political action and cinema...for all that, I post these facsimilies.

(Thanks to Klaus Volkmer for info and documents)
* 3:34 PM

Dry skin is fine-pores of the skin, which seems boring. It has a thin tone and is easily irritated. Those who have dry skin treatment drugs will be experiencing by flawlessness, tense and shaky feeling and even in places hardly breaks. This type of skin feels more comfortable with the night cream, cream and voila.
Accutane skin care drug (isotretinoin) is a form of vitamin A. It decreases the amount of sebum (oil) that is released by the sebaceous (oil) glands, and it increases that rate at which the skin renews itself.
Atarax skin care drug (Hydroxyzine) is used to relieve the itching caused by allergies and to control the nausea and vomiting caused by various conditions, including motion sickness. It is also used for anxiety and to treat the symptoms of alcohol withdrawal.
Azelaic Acid skin care drug is used for treating mild to moderate acne. Azelaic Acid Cream is a topical antibacterial. Exactly how it works is unknown, but it may block production of proteins necessary for the bacteria to survive.
Benzac skin care drug (Benzoyl peroxide) has an antibacterial effect. It also has a mild drying effect, which allows excess oils and dirt to be easily washed away. Benzac (Benzoyl peroxide) topical is used to treat acne.
Celestone skin care drug (generic name: Betamethasone) is in a class of drugs called steroids. Betamethasone prevents the release of substances in the body that cause inflammation. Celestone (Betamethasone) is used to treat various conditions, such as allergic disorders, skin conditions, ulcerative colitis, arthritis, lupus, psoriasis and respiratory disorders. Celestone (Betamethasone) may also be used for purposes other than those listed in this guide.
Cleocin skin care drug (generic name: Clindamycin), an antibiotic, is used to treat infections of the respiratory tract, skin, pelvis, vagina, and abdomen. Antibiotics will not work for colds, flu, or other viral infections.
Denavir skin care drug (generic name: Penciclovir) is used on the lips and faces of adults to treat cold sores caused by herpes simplex virus. Penciclovir does not cure herpes infections, but decreases pain and itching if applied when the earliest symptoms first appear.
Differin skin care drug makes the skin more sensitive to sunlight. During use of this product, keep your exposure to the sun, as a minimum, and protect themselves with sunscreen and clothing. It does not apply to brand solar skin.
Diprolene skin care drug (Betamethasone) is used to treat the itching, redness, dryness, crusting, scaling, inflammation, and discomfort of various skin conditions.
Dovonex skin care medication (calcipotriene) is used to treat psoriasis. It works by controlling the overproduction of skin cells in areas affected by psoriasis.