When the last war began, I was far away, in my house in Paris. I just wanted one thing: to return to Beirut as soon as possible and to start to shoot, they were historical moments. This film had become for me the essential film: to film to prevent the repetition in loop of the story, and create a bank of images for future generations. I never understood why there were so few films directed during the war in Lebanon. Except some rare films, nothing remains of this time. The war however needed more attentions. (September 2006)

[July Trip is a documentary essay shot in Lebanon during the last war in July 2006. Filmed in 16 mm and HDV, this film is more an essay than a documentary. Using connections between video and cinema, Wael Noureddine tells of the repercussions of the last war in Lebanon. The film plunges us in a universe in war: the images shot in 16mm sublimate a tension, frightening because of the lack of sound. An incipit in silence, almost a reference made to all the noises caused by the bombs, by the explosions, which will follow to this unconventional beginning. More than to give us his version of the war in Lebanon, the director suggests to us keys of reading throughout film. What does one have to think about the foreign journalists, who put themselves in scene in front of the camera? They remain bits of humanity behind the cameras which pile up in front of a corpse in rigor mortis?Do we really share this tabloid information and these scoops which relax us so much sitted on our sofas IKEA? Wael Noureddine does not formulate answers to all these questions, but lets the images and sound go on to make us become aware of our manipulation, of "a true" reality which hides behind the television news of the 20:00. We travel through the South of Lebanon, diverted by a torn landscape: a limpid sky, a blue sea, make this contrast even heavier. The Mediterranean sea, heart of civilization, was trapped by a too "human" history, nature seeks to rebel while making us weigh his beauty, the human "work" being, on the other hand, "monstrous". The repercussions of the war are there in front of our eyes, so present that we would like to go up on this boat with Europeans and come back home.](from the Mediterranean Films website) 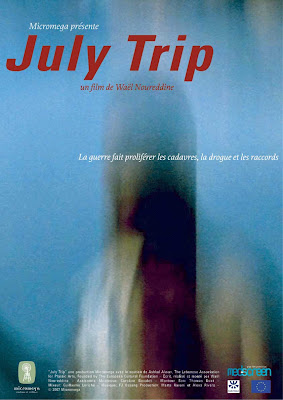 I feel you man. I was actually in Beirut at the time the war started, and even though I'm not Lebanese, I lived there for a year wa sirt lubnayni shway, I think.

But I felt compelled to write you a comment and say that although I think you had some great footage and also a clever and interesting idea for the film overall, I feel that you lost the audience a bit with the length. It would have been perfect with about 5-10 minutes cut from the overall length.

Just my opinion as an average person and non-film specialist.

Best of luck to you.