With a floppy hat on but with no one around (my writing desk) I say the same thing as Peter Falk...normal conversation, family atmosphere!
If cinephilia is a history of stubborn orphans and elected families (Daney) I've been blessed with good aunts, uncles and cousins. Past contributions to Kino Slang have made the thing worthwhile to me; now and in the future I'd like to intensify this in the interest of polemics, contrapuntuality; if not that, then at least sprightliness (you bastard! such words about a blog! it's only words and images put together!). John Gianvito's film image and the below series on Cassavetes by my compatriot Charles Leary are steps in this direction. Charles has done incredible work for the William K. Everson website and he continues to write on Cassavetes, among others. 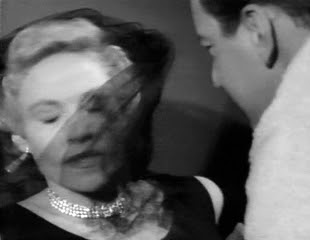 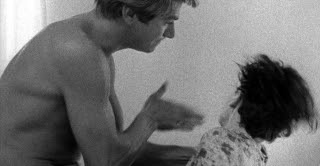 Slap to bring her back from the dead; Seymour Cassell and Lynn Carlin, Faces (1968) 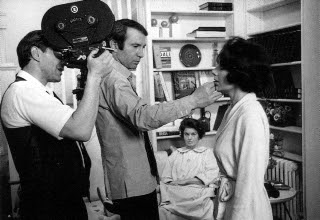 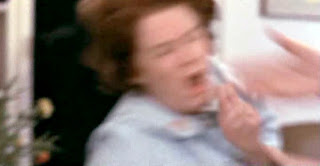 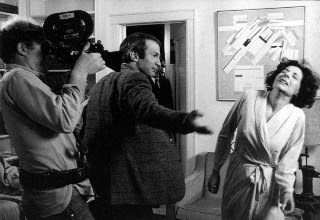 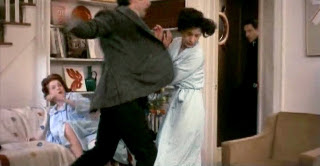 "You're not the first guy to ever punch his wife out." Ben Gazzara, Meta Shaw, Lorraine MacMartin John Cassavetes, Peter Falk in Husbands (1970) 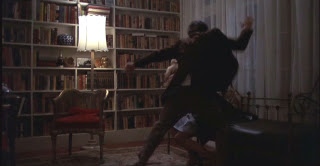 Cassavetes engages the whole body in motion for the force of a slap of Rowlands. Rowlands: “The secret is that the person who’s doing the hitting is in the foreground and he pulls his hand back to the camera. It’s not the forward motion of the slap you see. His hand doesn’t touch you but, as it looks like he’s hitting you, you have to snap your head back. At the same time, what I did was an old stage trick of clapping my hands loudly. You don’t need that on film because you can always put the sound in…the crew threw down the lights and anything else they were holding and rushed and grabbed John by both arms.” (from Judith Christ, ed., Take 22; also recounted on DVD commentary). Minnie and Moskowitz (1971).
In the 1983 draft of the screenplay for Love Streams, upon the arrival of Sarah (Rowlands) at Robert’s (Cassavetes) home, the following takes place:
ROBERT: I hate the word love. When someone says I love you, that means they want to kill you.
SARAH: If I wanted to kill you, you'd be dead, because I still have my magical powers. And I never do it with a knife or a gun.
The boy has been watching, taking it all seriously.
Robert lunges at Sarah, and she throws him down to the ground in a shot. Robert springs to his feet.
ALBIE (screams) Dad!
Robert moves to her and slaps her across the face. It's a fake slap; something they have done a thousand times before. Sarah gets up.
SARAH: I need a drink. Just one. I'm trying to stay balanced.

“See what you made me do!” Peter Falk rehearses the scene with Cassavetes, taking Rowlands’ in A Woman Under the Influence (1974) 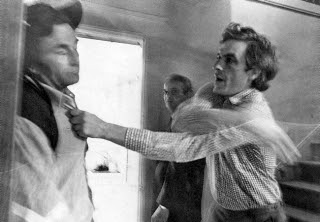 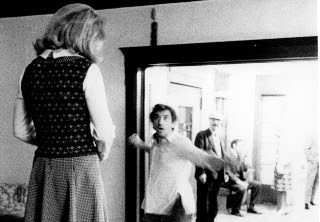 Cassavetes demonstrates (for Falk) the slapping of Rowlands atop the couch, as Cassavetes’s parents, Fred Draper, and Eddie Shaw look on. 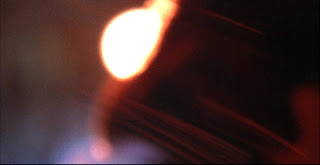 Before we know what is happening, Rachel (Azizi Johari) slaps an auditioning dancer. The Killing of a Chinese Bookie (1976) 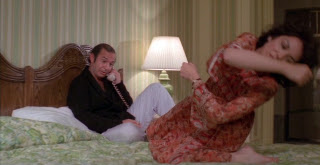 While Manny asks Myrtle on the phone, “What’s wrong with being slapped?” he is also annoyed by his wife Dorothy’s pantomime and asks her to stop. She (Zohra Lampert) mimics a punch (slap) to her face, making a noise of contact with her mouth, and falls limp to the bed. Opening Night (1977) . 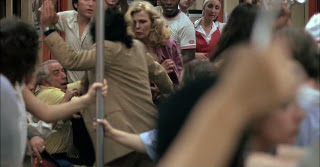 First, Gloria (Rowlands) slaps “the sissy” (Gaetano Lisi) then braces herself for his counter. Gloria (1980)

The tradition runs its course, and this is the last slap in a Cassavetes film.
This piece is by Charles Leary.
* 9:36 AM