The Secret Radiation of Denise Bellon 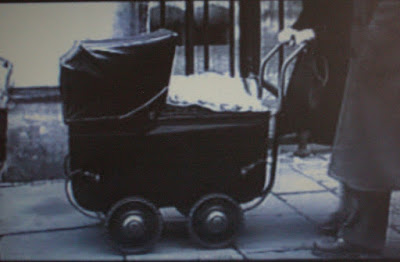 "...amusing to imagine BATTLESHIP POTEMKIN aboard this vehicle..."
(the feet of Henri Langlois and Mary Meerson, and the resistance vessel that saved innumerable films from Nazi confiscation/destruction. Photo: Denise Bellon) 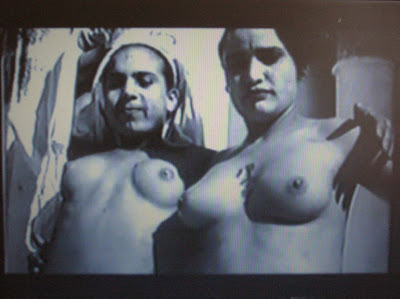 Le Souvenir d'un avenir a.k.a. REMEMBRANCE OF THINGS TO COME by Yannick Bellon and Chris Marker is one of the most extraordinary of all movies about, and almost entirely made out of, photography ("...to sustain the gaze of others..."). This is done with the tool of video and it is one of Marker's finest in that medium. The photographs under consideration are those of Denise Bellon who lived almost every year of the 20th century (1902-1999), just like Marker's other beloved subject, Alexandr Medvedkin, THE LAST BOLSHEVIK.

Filming the images that others have made, speaking through and with them, respecting and transforming them -- this is Marker's solidity (whereas for many other filmmakers, it is their anemia). Simple devices -- dissolves and cuts from photo to photo -- are movements from strata to strata. When he's using images he himself has shot, it's an image within the image: commentary. Marker is known for his beautiful voice over commentaries -- exact and digressive, personal and worldly, a totality of rhetoric -- and REMEMBRANCE's commentary track is no exception.

For all the mastery and invention of essay form in Marker that has been talked about on a literary bon mot basis, what's as important or perhaps more important is how these commentaries relate to the images, i.e. the cinematic basis: Marker manages to leave the image open while transforming it. In spite of the density of Marker's commentaries, his images are not smothered as images. Still, we must consider Marker's images of images as his (and his collaborators) own, because though Marker is recording the images of others  -- recording photographs -- it's his methods of cropping, emphasis with masking, duration, and angle that contribute (I would say entirely) to his particular kind of memorial and material rhetoric. Here in REMEMBRANCE, and especially in THE LAST BOLSHEVIK, we have extremely refined work with photographs. It's shocking how entrenched the conventions of filming documents and photographs in standard documentary productions have become; Marker doesn't use those conventions, even when he does. A little camera movement over a photo, a crop understood as a crop; Marker's commentaries would be merely lovely without the cinematic device. The ideas between the images, materials, authors -- all these generations -- are brutal and unmistakable in REMEMBRANCE; combat and testimony to history. Twentieth century anachronisms here don't crash into our century's back from the past; they come round and face us, and gently lap onto own epoch's feet. The photos recede as much as they return.

The body liberated, then mutilated, then appropriated by fascism.

Adverts for alcohol and socialism.

Then, about Duchamp the film says: "He'll be used to vindicate the art of vanity." Bellon took pictures of him as if he knew this.

Bellon took the only pictures of Langlois's cradle of all cinematheques, his bathtub filled with films.

Over Bellon's photos of suicidal Europe, the film later says "...it seems that nations on the verge of war make a point of parading their wealth, like misers who in their final death throes want to recount their treasures."

Bellon reported to L'Afrique occidentale française: "....even on the Left nobody thinks of independence..." In this sense she was a great human spy...as is, and always was, Chris Marker.

I have said very little about Bellon... that is what the film is for! See it here. . .


REMEMBRANCE OF THINGS TO COME was once available on Youtube, and I embedded all the parts below so that it could be seen -- but no longer. Here are the carcasses of that fact:

I think that "Le souvenir d'un avenir" is a good definition of "fado". Tabucchi calls it "Nostalgie du futur"...

your videos are no longer available ...
Sorry for that.

I have reason to believe that Marker himself demanded the film be removed from YouTube (back in '07). Not honoring that at all, here is the full film to be seen: https://www.youtube.com/watch?v=90FU2dolFc4