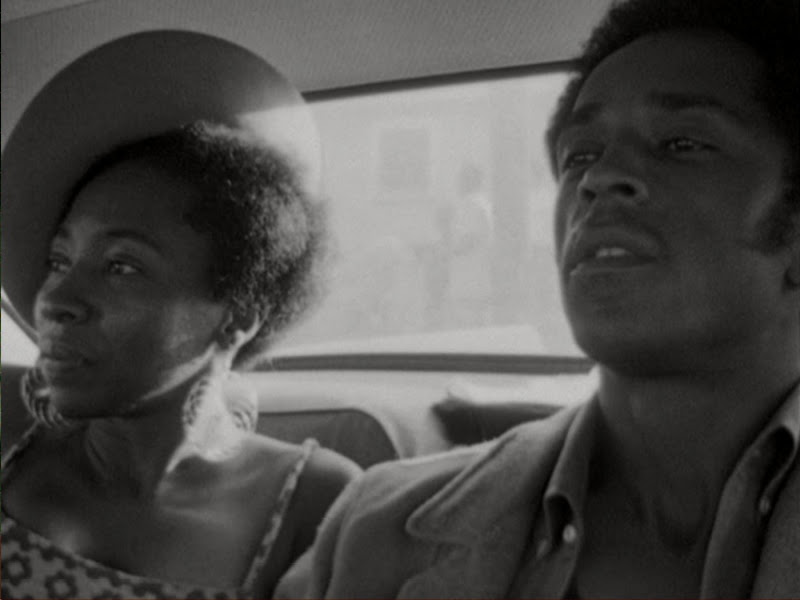 If one has any interest in film as a means of transforming society, one can certainly sympathize with the frustrations of the main character in the novel Bread and Wine by Ignacio Silone. The hero, who is a revolutionary hiding from the police, disguises himself as a priest; the villagers mistake him for a real preist. He attempts to explain that their social condition could be improved, that certain things -- food and shelter and the right to happiness -- belong to everyone, but the villagers can't conceive those things as a part of their reality; that is something to be obtained in heaven. The question is how does one who is dissatisfied with the way things are going set about transforming society? To whom and to what should one direct the message and what will be the spark, the messianic message, to motivate people into altering their habits when reality hasn't made a stir, when the realization of death itself has failed? However, time and again, you find in the testimony of ex-addicts and alcoholics that what made them stop and go cold turkey was that after years of destroying themselves, they looked in the mirror one day and did not recognize the person staring back at them. And having tried to change drug addicts, I was warned that no matter what logic, no matter what emotional appeal I used, it would have no effect on that person until he or she was ready to change; it is when the person has arrived at the conclusion that he or she needs help.

For a film to act as an agent for altering people's behavior in a way that makes a neighborhood safe, another dynamic has to have occurred and it is an ongoing process; a politicization must be taking place. There is a polarization and issues are clear-cut, ambiguity is at a minimum and there is a moral outrage if things don't change. Because the situation in the black community lacks leadership, it lacks direction. The inner cities are virtually infernal regions where the most inhuman behavior manifests itself in the "Rock House", a house where one can buy a cheap high from cocaine; it is like a black hole in space which sucks in the youth. For those of us who still have senses to offend, not to attempt to find a solution will be participating in genocide; the problem of drugs, with babies being born with a drug addiction, is horrendous. When the middle class moved away and over the years a vacuum formed and an isolation, people of daring gained control and the irony is that there was a conspiracy to hide the situation.

Particularly in films that were sounding the alarm and realistically trying to dramatize concerns that were eroding the very foundation that makes a society a society, the response was, 'This makes us look bad'. To bring to light that which troubles us was being uppity, no home training, etc. The middle-class blacks wanted to emphasize the positive and the inner city wanted 'Superfly''; neither had any substance, however, both were detrimental. There is a difference between illusion and inspiration. The difference in concerns clearly marked the direction in which consciously or unconsciously the people who lived on the opposite side of the tracks were going. Surprisingly, politically speaking, there is a large reactionary and/or chauvinistic point of view in the inner city.


The commercial film is largely responsible for affecting how one views the world. It reduced the world to one dimension, rendering taboos to superstition, concentrated on the ugly, creating a passion for violence and reflecting racial stereotypes, instilling self-hate, creating confusion rather than offering clarity: to sum up, it was demoralizing. It took years for commercial films to help condition society on how it should respond to reality. In the later films that strove for a reality, the element of redemption disappeared, and as a consequence the need for a moral position was no longer relevant. There was no longer a crossroads for us to face and to offer meaning to our transgressions. The bad guy didn't have to atone for his sins. He could go on enjoying life victimizing innocent people. In essence this cinema is anti-life; it constantly focuses on the worst of human behavior to provide suspense and drama, to entertain. The concerns are generally about a young white male and the rest of society is anathema. Any other art form celebrates life, the beautiful, the ideal, and has a progressive effect -- except American cinema. The situation is such that one is always asked to compromise one's integrity, and if the socially oriented film is finally made, its showing will generally be limited and the very ones that it is made for and about will probably never see it. To make film-making viable you need the support of the community; you have to become a part of its agenda, an aspect of its survival.


A major concern of story-telling should be restoring values, reversing the erosion of all those things that made a better life. One has to be prepared to dig down in the trenches and wage a long battle. The problem is that we are a moral people, and the issue need not be resolved by a pushing and shoving match or taken in blind faith, but should be continuously presented in some aspect of a story, as for example in the negro folklore which was an important cultural necessity that not only provided humor but was a source of symbolic knowledge that allowed one to comprehend life. The issue is not necessarily to lead one to become a saint or a to make the world a paradise but simply to remind us that our acts not only weigh on our souls, but also that by putting them in a narrative we make them human. A good summation on this theme would be in Men in Dark Times by Hannah Arendt, who in her chapter on Lessing states that 'however much we are affected by the things of the world, however deeply they may stir and stimulate us, they become human for us only when we can discuss them with our fellow...We humanize what is going on in the world and in ourselves only by speaking of it and in the course of speaking of it, we learn to be human.' Solidarity and humanity occupy the same space. And nowhere is a common bond more necessary than in the inner city. It seems that the object of all films should be to generate a gense of fraternity, a community; however, for an independent film-maker that is the same as swimming against a raging current.


One of the features of my community is that it does not have a center, does not have an elder statesman, and more important, does not have roots; in essence it is just a wall with graffiti on it. Life is going to work, coming home, making sure every entrance is firmly locked to keep the thugs out, thinking on how to move up in the world or being a member of a street gang standing at neighborhood corners, thinking about nothing and going nowhere. In both cases what is missing is not only the spiritual but mother wit. Even though there is a church on every other corner, it only holds services once a week and it is not a dominant part of the life of the community. It is like a ship that has lost its rudder. It seems that those of us who observe tradition and have a sense of continuity can at least see the horizon. External forces more than internal forces have made the black community what it is today. There has always been the attempt to destroy our consciousness of who we were, to deny the past, and to destroy the family structure; and, since for us each day has not a yesterday or a tomorrow, to make the use of experience a lost art.

Those who live a healthy existence, meaning those who live on the other side of the tracks, gain knowledge through learning, and those who live on my side of the tracks learned about the world through conditioning based on pain and pleasure, and what has developed as a consequence is that man is wolf to man and every night is a full moon. We have always lived in a hostile environment, but not one where parent and offspring turn guns on each other. The inner city is characterized by people with irrational behavior. The perception is that people are dangerous. Everyone is paranoid and rightfully so. It isn't the schizophrenia that is disturbing. It is that multiple personality type, people with two people inside them and more. You can witness them changing character in a breath. How do you place a chair for someone who can't sit still? In trying to find the cure, what person do you address? It is not a matter of informing someone of the truth, the facts, reality; it is only when he finds that he can't live with himself, when he has stopped deluding himself. The way back is redemption.


If film is to aid in this process of redemption, how does it work its magic? It seems that old question of why are we here, and not getting a satisfactory answer, makes man's fate intolerable. I think that it is the little personal things that begin to give a hint of the larger picture. The story has the effect of allowing us to comprehend things we cannot see, namely feeelings and relationships. It may not give you answers but it will allow you to appreciate life and maybe that is the issue, the abiility to find life wonderful and mysterious. If the story is such, film can be a form of experience, and what is essential is to understand that one has to work on how to be good, compassionate. One has to approach it like a job. Until there is a sharing of experiences, every man is an island and the inner city will always be a wasteland.

Anonymous said...
This comment has been removed by a blog administrator.
3:46 AM