Daney on ICI ET AILLEURS: A Newly Unearthed Text and Some Known Ones 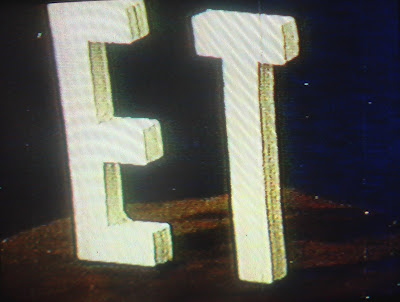 Bill Krohn has recently rediscovered an unpublished single page text by Serge Daney. The text is a short preface to Godard/Gorin/Miéville's ICI ET AILLEURS (HERE AND ELSEWHERE, 1976). It is presented below in a translation by Laurent Kretzschmar and Krohn.

Daney wrote the text in New York while there to present the first SEMAINE DES CAHIERS DU CINÉMA* at the invitation of Jackie Raynal of the Bleeker Street Cinema in 1977.

It was written for the New York audience about to see ICI ET AILLEURS for the first time. The text however does not appear in the magazine that served as a program for the SEMAINE, The Thousand Eyes, Number 2**. It's possible that this Daney text was translated and printed as a hand-out for the spectators of ICI ET AILLEURS at the Bleeker. However Krohn doesn't recall if it was ever actually printed and believes it has never been published.

There was quite a bit of anxiety surrounding this 1977 screening of ICI ET AILLEURS: about a year earlier, in Paris on September 15, 1976, a nail-bomb was planted by a Zionist terrorist group at one of the two theaters where the film was to have its premiere. The bomb didn't explode, the film was removed from the theater. 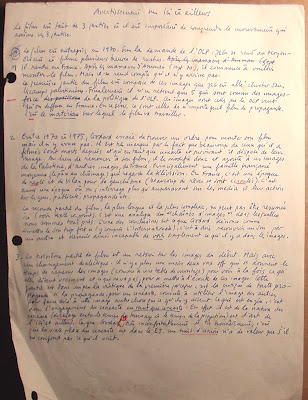 Preface to Here and Elsewhere


The film consists of 3 parts, and it’s important to understand the movement animating these 3 parts.

1. The film was undertaken in 1970. At the request of the PLO, JLG goes to the Middle East and shoots several hours of rushes. He returns to France. After the Amman massacres (Sept 1970***), he starts wanting to edit the film. But he discovers he can’t do it.

The first part of the film is composed of the images that JLG went looking for in the Palestinian camps. Eventually, he retains only 5 of them, which are like the image force**** of the PLO’s politics. These images are those that the PLO wants to see broadcast in France. In that sense, they are the images of any propaganda movie. This is the material the film is going to work with.

2. Between 1970 and 1975, Godard tries to come up with an order to edit his film, but he can’t find one. He is very conscious of the fact that many of those he has filmed are now dead and that, as a filmmaker and survivor, he has their image at his disposal. Instead of giving up, he modifies the film and adds other images to the pictures of Palestine, images of France. Mainly of an average French family (the father is unemployed) who watch television. In France, the Left is in a period of retreat and assessment (many dreams have crumbled). It’s also a period where more questions are being asked about the media and their effect on people, about advertising, propaganda, etc.

The second part of the film, the longest and the most complex, cannot be summed up here. It’s an analysis of the "chains of images" in which we are all caught. One of its conclusions is what Godard denounces as “playing the sound too loud” (including the the Internationale), i.e. covering one sound with another, thus becoming incapable of simply seeing what’s in the images.

3. The third part of the film returns to the images of the beginning. But with a dialectical change. There’s no longer one but two voices-over who take the time to watch the images again (like on an editing table) to see both what they are really saying and what’s wrong, to listen to these images. This part is therefore a kind of critique of the first part because it criticises any propaganda, if propaganda means – for a filmmaker – using the image of others to make this image say something else than what the others are saying in it. So what’s at stake is the engagement of a filmmaker as a filmmaker. For it’s in the nature of cinema (delay between the time of shooting and the time of projection) to be the art of here and elsewhere. What Godard says, very uncomfortably and very honestly, is that the true place of the filmmaker is in the AND. A hyphen only has value if it doesn’t confuse what it unites. 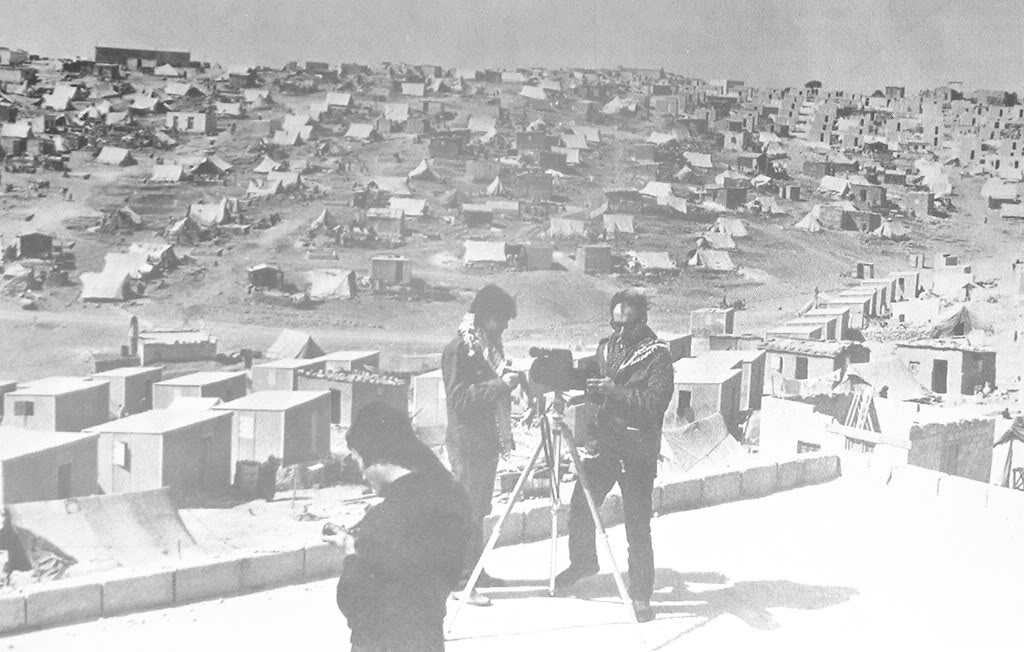 [unidentified], Gorin, and Godard shooting UNTIL VICTORY, "the film undertaken...at the request of the PLO", in a Palestinian refugee camp, Jordan, 1970. Unknown Photographer. 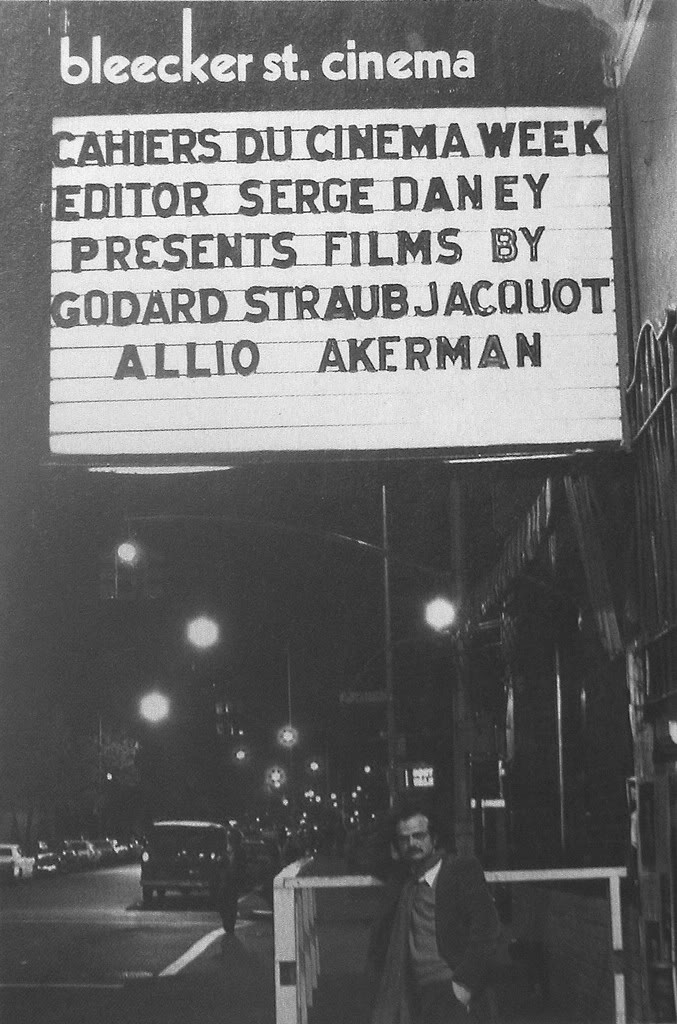 
Serge Daney continually wrote and spoke of ICI ET AILLEURS. Below are excerpts from 2 essays and an interview, by no means exhaustive of his engagement with the film.
In ICI ET AILLEURS, for example, a "film" about images brought back from Jordan (1970-1974), it is clear that the questions raised by the film about itself (the kind of disjunction it effects in every direction: between here and elsewhere, images and sounds, 1970 and 1975) is only possible because the syntagm "Palestinian revolution" already functions as an axiom, as something which is a matter of course (something already-said-by-others, in this case, by Al Fatah), and in relation to which Godard does not have to define himself personally (to say "me, I," but also to say "me, I am with them"), or to show his position in the film (to socialize, make convincing, desirable, the position he has taken, his initial choice: for the Palestinians, against Israel.) Always the logic of school.
(...)
The impossibility of obtaining a new type of filmic contract has thus led him to keep (to retain) images and sounds without finding anyone to whom he can return them, restore them. Godard's cinema is a painful meditation on the theme of restitution, or better, of reparation. Reparation would mean returning images and sounds to those from whom they were taken. This also commits them to produce their own images and sounds. And all the better if that production obliges the filmmaker to change his own way of working!

There is a film in which this restitution-reparation takes place, ideally at least - ICI ET AILLEURS. These images of Palestinian men and women that Godard and Gorin, invited by the PLO, brought back from the Middle East, these images which he has kept in front of him for five years -- to whom should they be returned?

One day, between 1970 and 1975, Godard realizes that the soundtrack is not completely translated, that what the fedayin are saying, in the shots where they appear, has not been translated from Arabic. And that in the end no one would be very bothered by this (accepting the fact that a voice-over covers these voices). Now, Godard says, the fedayin whose words have remained a dead letter are dead men with a reprieve - the living dead. They or others like them died in 1970, were killed by Hussein's troops.

To make the film ("You must always finish what you have started") is then, quite simply, to translate the soundtrack, so that one hears what is being said, or better: so that one listens to it. What was retained has been freed, what was kept has been restored, but it's too late. Images and sounds are rendered as honors are rendered, to those to whom they belong: to the dead.
--Excerpt from THE T(H)ERRORIZED, Cahiers du cinema, no. 262/63, January 1976. Translation by Bill Krohn and Charles Cameron Ball.
(...) In a Beirut hotel, a Frenchman ‘in love with the Orient’ (Jean Carmet) takes photos of a recent slaughter out of a briefcase and puts them up for auction. Children lead Laschen and Hoffman to a carbonised corpse. Everything has image potential, a second, now marketable death. What’s to be made of these images, Laschen wonders? What’s to be made of this chain where we necessarily feature, from one link to another: corpse, photograph, modelmaker, reader? What’s to be made of his fine soul?

Godard already asks this question in a film now six years old. The film, which talks about the Middle East, was called ICI ET AILLEURS and it wasn’t a great success. Before photos of the victims of the Amman massacres of 1970, Godard allowed himself the black humour of wondering (in an aside) if these extras had been well paid, and how much? The lesson was clear. When Godard and Schlondorff began making films we could still think of war as merely obscene (LES CARABINIERS, LE COUP DE GRACE). Nowadays it has become completely pornographic. There are image dealers just as there are arms dealers. A film-maker occupies a place somewhere in this chain. Does he know this? With CIRCLE OF DECEIT, Schlondorff has just found out.

Godard halted the chain, blocked the spectacle, reflected on an image, imposed his voice on us, the chagrined voice-off of a moralist. (...)
--Excerpt from entry on CIRCLE OF DECEIT (Volker Schlöndorff). from the Ciné Journal, Libération, 29 October 1981. Translation by Liz Heron.

Philippe Roger: How can the idea of information and the idea of democracy be articulated today?

Daney: There’s no question that seems more urgent, and yet it’s as if we hadn’t begun to think about it. I’m staggered when I see that all I have to do nowadays is recycle a tenth of what was in ICI ET AILLEURS for me to look like some kind of guru in the eyes of professional journalists or film students. It’s nice for me, but all the same it’s strange. Strange too how in the wake of this war (ed. note: The First Gulf War) the usual theoreticians and advocates of the ‘fourth estate’ are silent.

What is democratic? That more and more people become amateur semiologists and learn to surf blithely on the linguistic drift imposed on them by the market, via advertsisng? That was more or less the idea that prevailed in the Eighties; the '68ers delight in being reconciled with the idea of the market. Or else that more and more people have the capacity to see what is (just an image) and to imagine what is missing (that more, just image which is being kept from them perhaps)? Will this be an idea of the Nineties? To be honest, I don’t know.
--Excerpt from Le Passeur, Philippe Roger's interview with Daney, 1991. Translation by Liz Heron.

*The films screened at the SEMAINE were ICI ET AILLEURS [Godard, Gorin, Miéville, 1975], COMMENT ÇA VA? [Godard, Miéville, 1977], NEWS FROM HOME [Akerman, 1976], L'ASSASSIN MUSICIEN [Benoît Jacquot, 1976], IM LAUF DER ZEIT [Wenders, 1976], FORTINI-CANI [Straub, Huillet, 1976], MOI, PIERRE RIVIÈRE - AYANT ÉGORGÉ MA MÈRE, MA SOEUR ET MON FRÈRE... [René Allio, 1976] and NUMÉRO DEUX [Godard, Miéville, 1975].
**This number of The Thousand Eyes, slim though it is, has considerable heft and merits further mention: it includes a number of translations of Cahiers texts (Narboni, Skorecki, Bonitzer, Foucault) on the aforementioned programmed films; the first English translation of Daney's seminal essay on Godard and pedagogy "THE T(H)EORRORIZED"; and two crucial pieces by Krohn, "THE TINKERERS" and an interview with Daney himself, which illuminate the terms and matters of a specific cultural struggle, namely how Daney and the Cahiers went from their "passion for films like BABY FACE NELSON (Siegel) and RANCHO NOTORIOUS (Lang)" to "films made in factories, ghettoes and armed camps all over the world."
***For a bit of information on Black September in which thousands of Palestinians were killed read here.

****Translator's note: "image force": the electrostatic force on a charge in the neighborhood of a conductor, which may be thought of as the attraction to the charge's electric image.


To see fragments of Godard and Gorin at work in the planning stages (elsewhere) of UNTIL VICTORY ("the originality of the Palestinian revolutionary situation"), see GODARD IN AMERICA (1970) here.

Great stuff, Andy - thanks to you and to Bill K.