Danièle Huillet : There is something else in cinema besides directors, on which all the cinema rests: its craftsmen, its technicians, and that's also a social history. People who entered the cinema of the generation of Louis Hochet, our sound engineer, were generally people who came out of the working class and for whom the cinema was a possibility of upward mobility. But they brought their classes with them, their intelligence and experience. Now, this has also disappeared from cinema: the cinema became a Mafia, the son of a technician becomes a technician, the daughter of an actor becomes an actress... And that represents a loss of fantastic energy. 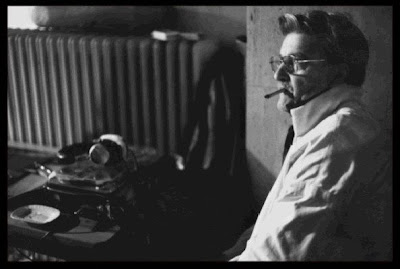 
Jacques Aumont : It's true from this point of view, the lists of students at IDHEC or FEMIS are interesting, there is a high proportion of surnames of film people or known intellectuals.


D.H : We see it in concrete terms. The young technicians are often very nice, relatively less pretentious than directors. Nevertheless, there is a loss in terms of intelligence and experience, which is also frightening.


Jean-Marie Straub : And then, there’s too much vanity. There’s almost only vanity, there’s no ambition now.


D.H. : But ambition is also a social fact: someone that comes from below and wants to climb has ambition.


J.-M. S. : A musician condenses time with time. That’s the affinity between music and cinema. The work to be done is of not getting bogged down in the space that we show; it’s terribly annoying to see tracking shots, never ending pans. When I hear talk about sequence shots (plan-sequence) I want to vomit; that consists of being bogged down, and besides people now don’t even know what it means concretely. One must know how to, with space, condense time, and how to condense space to get time; also, if the actors speak there can be a relationship to vocal music (or not, if we don’t want it). After all, when someone says hello, it can be notated, no? [To Danièle Huillet:] Why are you staring at me like that?


D.H. : I was thinking about the time when all that wasn't separated...


D.H. : Yes... But cinema could find something, and that's what has been lost. It's frightening when you look at old films, to see what was lost en route, all that was possible and that has been ransacked, looted, repressed. This is especially frightening because it's a model for what happens in general.


J.-M.S. : That money is profit. Barbarism is not just in society, it's also produced at the individual level.


D.H. : By saying every time that this will be the last -- not like (Ingmar) Bergman, but concretely, in the knowledge that one has no future.

thanks to bill and the notator a. mota dias.

"Now, this has also disappeared from cinema: the cinema became a Mafia, the son of a technician becomes a technician, the daughter of an actor becomes an actress... And that represents a loss of fantastic energy"

So sad and true, and not only in the film sector. It's easier for a rich man's son to become a Graphic Designer than for a worker's son, however more creative the worker's son may be.

I know a person which did a post.degree in museology, worked for free all the while on the matter as a scholar, but could work in that afterwards, as the posts in museums were assigned sons of noblepeople.

Thank you for posting this, Andy.

The Mafia part is an ugly truth of Indian cinema- while the industry is closed to everyone else.