Hitchcock’s Under Capricorn
by Jacques Rivette


This 1950 article by Jacques Rivette from La Gazette du cinéma appears here for the first time in English translation, by Ted Fendt. (Maximum thanks to him.)

The critical reaction to Hitchcock’s last film indicates a certain discomfort. It seems like the conspiratorial silence will only be broken in order to quickly take shelter under two or three reassuring commonplaces about filmed theater, monologues and the return of the “art film.” The story is, moreover, never mentioned except as a very flat melodrama, not worthy of holding the attention of honest folks. This is undoubtedly jumping the gun and there are some lines, by way of exception, that do grab our attention: “It seems as if Hitchcock is the only director who understands what cinema can take from Dostoyevsky’s universe, by which I mean a purely moral universe” (J.J. Saloman). Is this script—which combines several of the most beautiful themes American cinema has had the pleasure of treating—not the best with which Hitchcock has ever worked? It participates, first, then, in the prestige of films where a dark past weighs on the story’s present and the action is summed up by the variations in the relationships the two protagonists have with it. No revelation, moreover, motivates their change of attitude and it is out of a greater awareness of themselves and their true relationships that is born this new, more lucid perspective that makes them victorious over the past. This is a past whose power is extended in the appearance of a governess who gives the story its only spectacular outlet and objectivizes action that could have remained completely interiorized. Her plans coincide with those of the intimate fatality hovering over them: to separate the lovers the way they are separated by their past, the bad memory of which wants them all to itself. Bergman’s alcoholism, encouraged by the governess, is only the image of the secret ravaging her inside and the punishment of the imprudent person who wanted to lock the past inside her. 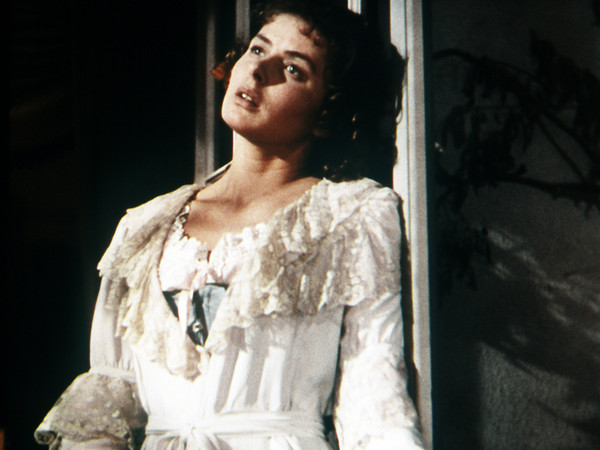 Everything happens, then, in light of memory and in relation to it. The secret subject of this drama is confession, the deliverance from a secret in its two meanings: in the psychoanalytic sense, because it frees us from the secret by giving the secret a verbal form, and in the religious sense, the confession of sins being equivalent here to their redemption.

A person’s reconquering of their own self is carried out under the double sign of deliverance and redemption providing the film its internal, dramatic progression, a victory over self-contempt and fear of the contempt of others. Social displacement is only the image of a more profound decline: what is worse, having to hate oneself and feel one’s own fall or to know one is responsible for the fall of someone else? The transfer of responsibility for the sin had previously split the couple, the one assuming the punishment, the other the bad conscience. This first sacrifice, wrongly consented to, obliges them to abandon themselves to the euphoria of other incessantly renewed mutual sacrifices. In the end, it is not possible for them to abandon the sacrifice and accept happiness without the third person in turn taking it on before departing—the carrier of evil, bringing in her wake the drama’s Erinyes, far from Australian land.

Not the least of the script’s merits is its resolving of this complex network of emotions and shots into a story with a clear, linear continuity. Hitchcock’s direction—which is also very discreet—intentionally remains on the side of its subject, refusing to underline the important points and, instead, simply presenting them to us. The camera surrenders to the characters as they move around but usually refuses to penetrate and intervene in their interior lives. If the surface details of the story—including the macabre evidence—are underlined in one heavy, abrupt stroke, it is because Hitchcock does indeed love disposing of the whole spectacular side of a plot through excess and, by taking on the outrageousness of such details himself, frees the spectator from being preoccupied with them.

Long takes are also employed without any problems. Shot changes are frequent—on the axis or at pauses and breaks in the action. Still, every moment of sustained tension demands to be filmed in one take: the governess’ insidious monologue, Bergman’s long confession. The shot is identified with each movement of the drama.

Because the camera lingers inside one dwelling, on four characters, and because the outside world barely intervenes except as caricatured and reduced to a universe of puppets and postcards, people talk about filmed theater. Yet, is what is shown to us not constantly established as what is most important, if not most spectacular? To regret not seeing a horse break its leg while all the dramatic tension on the verge of breaking a moment later is concentrated right before our eyes between Cotton and Bergman is a very infantile conception of cinema.

If theater and cinema both present us man in action (speech and gesture), the modes of appearance differ in singular ways and this change of perspective does not occur without seriously changing its subject. It is not only that in this case it is a matter of the organization of a concrete world where the sets always fool our eyes and look as real as the actors’ bodies, where man is inserted into a real universe, in his image. Here, this order takes the form of the irremediable: affixing something on film—willingly or not—imposes it but demands a definitive agreement between all the elements in the shot. How, finally, do we separate each moment from the point of view to which the camera surrenders us—the prefabricated gaze, irremediable as well, whose agreement with its subject is undoubtedly verified not so much by the invisibility of the découpage as by its transparency? It seems we are more sensible to this the more the artifice is threatened and it is certainly not defined by an absence of research but by extreme research taken to the point of destroying its own traces. Theater is subject to the virtue of presence and the contagion of corporeal lyricism, cinema intellectualizes concrete givens through the sole distinction of the rigorous organization of time and space, irremediably linked and positioned. Not the least of the Ten Minute Take’s virtues is its surrendering of all the elements of the film to such a precisely mechanical organization: the economy imposes its law on the aesthetic and completes it, the timing of every gesture constrains the actors to metrical movements. Subjected to the camera they are focused into these mechanical performances that are characteristic of cinematic performances usually only arrived at through fatigue after long rehearsals. The actors yield to the camera while the camera, to the contrary, follows them and the alternately tense and relaxed performances respect the double movement of tension and relaxation in dramatic respiration. The actor’s body—which in theater is only the abstract support of gesture and speech—discovers its full carnal reality: an opening eye breaks the screen, hands and faces, in their slightest quivers, open and express, like voices, a truth that is entirely of appearances. Constantly, before our eyes, the flesh is visited by the spirit. A certain plastic ugliness only brings out more the entirely moral beauty of this film: Ingrid Bergman shriveled, covered in makeup, old during her first appearance, rediscovers, little by little, at the same time as inner peace, the strength to smile and be beautiful and it is while radiating from purity and happiness that she takes her leave with a bow.

Hello ! Do you know where I could get the same article, but in french ?! Thanks !