The following text by critic and filmmaker Jean-André Fieschi (1942-2009) is one of the greatest ever written on the films of Straub and Huillet, yet it has fallen into pitiful disuse (for entirely political reasons, it seems to me) despite its availability in English since 1980, and despite the increase in books, articles, exhibitions, and screenings of Straub and Huillet's work the last few years. It was written in 1976, first published in Ça: cinéma – no. 9, then in English translation by Michael Graham in Richard Roud’s Cinema: A Critical Dictionary (1980). It is reproduced here by permission of Marthe and Simon Fieschi, with great thanks to them and Ricardo Matos Cabo.

Films could be imagined in which real violence would, for once, speak. The white cloth stretched across the back of a black tunnel is usually open to the soporific, the complaisant, to misrepresentations and the circulation of the small change of fantasies. Once more cinema might become surprising, once more necessary.

Films could be imagined in which, at last, real Desire would speak. Francis Ponge in Le Carnet du Bois des Pins writes that during the war he lived in the south of France. He missed his library. So he undertook to write what he wished to read: to make writing the compensation for a simple but demanding desire. 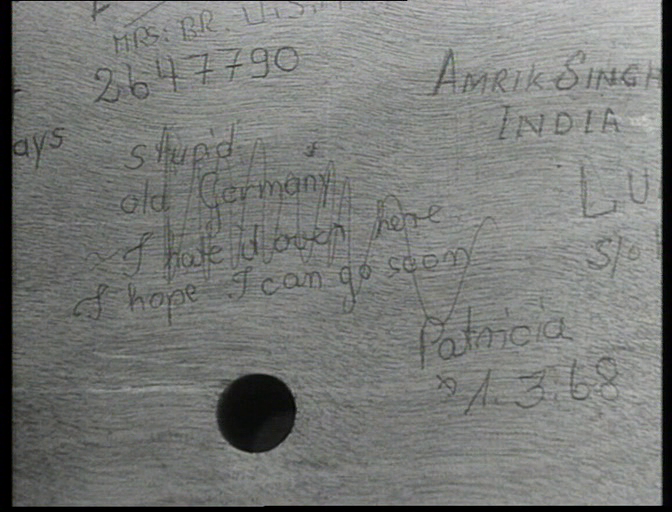 One ought to be able to think that there is no other kind of writing, nor any other kind of pictures, or music, or films. In any event the nature of the mass of films is predictable: if they are indeed, like any social product, more or less diversified responses to a specific demand, the demand in question is a perverted one. In capitalist countries, cinema is indissolubly linked to Capital and to Ideology. Cinema sells dreams, the real disguised; fantasy, imaginary satisfaction; nostalgia, regression; sometimes it sells Utopia, always the Elsewhere.

A kind of cinema could be imagined which would sell nothing, just as Stravinsky said that music expresses nothing; a kind of r cinema which would not consider the spectator as a customer, which would not lure him, nor t seduce him, nor flatter nor despise him, would not rape him nor put him to sleep; a kind of cinema that would be the exact opposite of advertising. In 1974 on the walls of Paris could be seen a surprising series of posters. A man with a vague smile and a meaningful look addresses the passer-by, a possible customer, in the name of a well-known bank. And he speaks the truth: "I'm interested in your money."

A kind of cinema could be imagined which sells nothing; but which would not hold itself aloof. On the contrary, it would militate, and would neither ape anything nor exhibit itself, neither bargain nor repress. The viewer would at last be placed at a proper distance, neither ensnared in conniving proximity nor crushed by the exercise of an art which proclaims itself inaccessible. 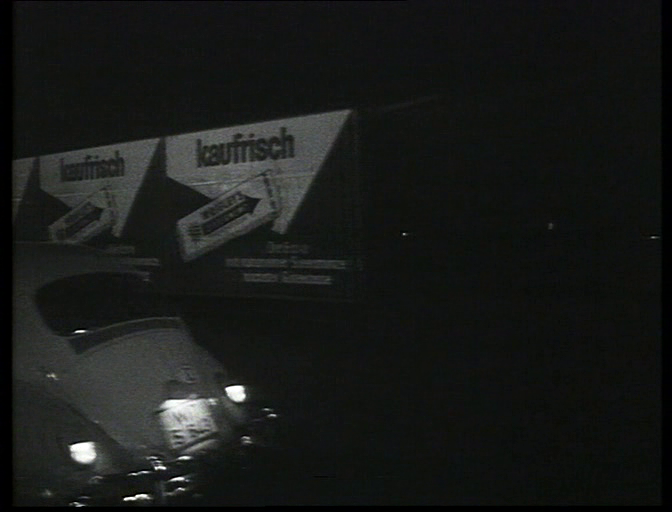 This is a dream, but a necessary dream, that of reappropriation. "When one wishes to speak to the people, one must make oneself understood. But this is not a problem of form. The people do not understand only old forms. In making social causality clear Marx, Engels, Lenin continually employed new forms. Lenin not only said something different from Bismarck, he said it in a different way. In fact he did not bother himself about whether a form was old or new; he spoke in the form that was appropriate," to quote from Brecht.

It could thus be imagined that beauty, violence and desire might be offered again, intact, to be discovered anew—the beauty, violence and desire present in the work which transforms music and texts; for instance, the music of Bach or the plays of Pierre Corneille, now the hunting reserves of specialists, professors and pedants. And might be offered in such a way as to be an insult to specialists and bad professors. In such a way that the music makes clear that it has not yet been heard, that these texts have not yet been read. What would music and texts already heard and read be if not dust, cultural dust, museum pieces, savings bonds . . . What would music and texts be that did not resist, that would let themselves be tamed? And films?

This would be the stake: to speak to those who have neither heard nor read rather than to those who do it out of duty, through routine or idleness, and to say to them: "Here, this too belongs to you, and is worth being read, heard or looked at; this violence is yours, and this desire."

Why would this new cinema bother about the past? Why should revolutions, cultural or political, pose as guardians of a heritage?

"To guard a heritage in no way means remaining confined to that heritage" (Lenin). When resorting to the forms of the past, whether of Bach and Corneille, or Brecht or Schoenberg, the only nostalgia which can be read will be that—and it too will be violent—for a future for which these forms are still a summons.

Everything leads one to believe that in this different kind of cinema modesty will be taken for arrogance, purity for obsession, austerity for poverty, wealth for insolence.

Cinema designated as deviant, perverse, proud, perhaps even a little Jewish, and as such destined to the ghettos. It will be censured, or praised excessively, removed to a pedestal, if not to the corridor . . . in any case, it will not be accepted. Nor is there any need of a trial: the entire weight of dominant cinema by its mere existence condemns it to exile.

But if it were the other way round?

If instead it were this cinema, marginal and exiled which, by its very existence, won at great risk, questioned the existence of the entire mass of the dominant cinema?

If such a project could be formulated, would it not be the fruit of a rather comic and excessive ambition, perhaps even mystic or messianic?

Yet this cinema might not have an auteur (which is to say a person caught up in the fantasy of being a demiurge, referring to a rage for expression which is only personal). Who would speak then? Bach or Pierre Corneille only, or Brecht or Schoenberg?

That of the film perhaps: what circulates, in the film, between these words. In the film: but the film is not a receptacle or a filter. What circulates, transforms itself, generates itself between these words, their resistance and the resistance of the material—concrete materials: cameras and microphones and—less malleable—faces, bodies, ways of speaking. And more: light, wind, shadows. . .

What would speak then would be a struggle, materially inscribed on this white surface at the end of a black tunnel; a conflict of forms, meaning and material. The film would be a documentary of this struggle. 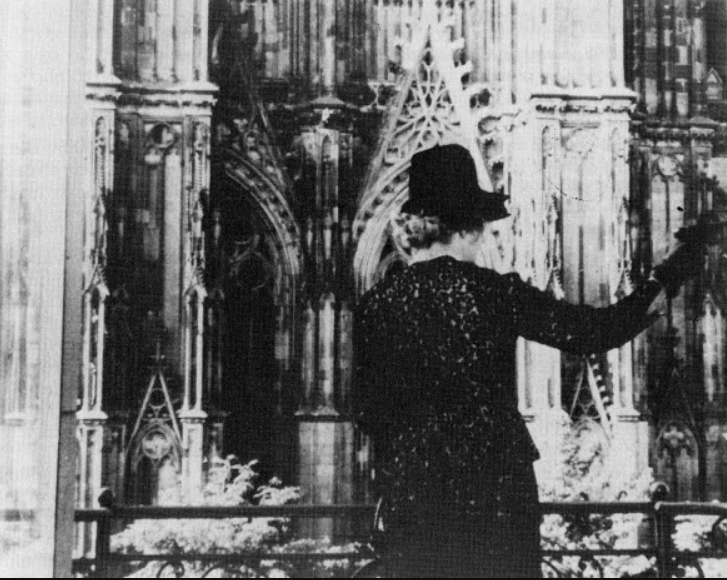 Martha St Andner in Not Reconciled: "I want to shoot the fat man on the white horse."

This conflict would not be a spectacle. A side has to be taken, the struggle has to be joined; unless one could be satisfied with the worst, being a spectator—at a film: a shadow among shadows.

These films then would not be films, nor these spectators spectators? Would someone want to break the old machinery, or forbid the trip? These films would be actions. As Pierre Boulez said of Stravinsky, "He simply acted."

For instance, a man would be seen struggling with a text, its material nature: meter, scansion, sound and sense. At grips with a language, neither his own nor of his time, but strongly actualized by these distances, their effect of strangeness, at first disquieting and later curiously familiar. Slowly being burned by the sun—not spotlights—his lips cracking, his skin reddening. His voice, his rhythm, the way it carries, all subjected to the rivalry of the wind. This discourse would be caught in a tight network of other discourses, victorious over other resistances: fatigue, the sun, or again, the wind; or the murmur rising up from the town, its crowds or traffic; or yet again, the regular flow of a fountain.

And these discourses, these resistances, their fusion and clash; their web, tissue and texture would be inscribed in struggles for power, passions, interests, desires. Here could be read other forces, other struggles, other resistances: the fall of an Empire or impossible Love. In any case, history, that is, politics.

Brecht again (and for a long time to come): "The dramatic aspect (the violence of confrontations) the passions (the degree of warmth), the surface covered by a character—none of this can be envisioned or conveyed separately from the functioning of society."

A man could also be seen, for example, at grips with music or money. At grips with money and music (reality and desire). In any case with History, that is, again, Politics.

This cinema would show men at grips with what the cinema itself is at grips with: desire, work, money, politics. It would not show them the way a mirror does: that which already exists. But it would show the process itself: something existing, the trace of the struggle. Not only its lucidity but its spectre. 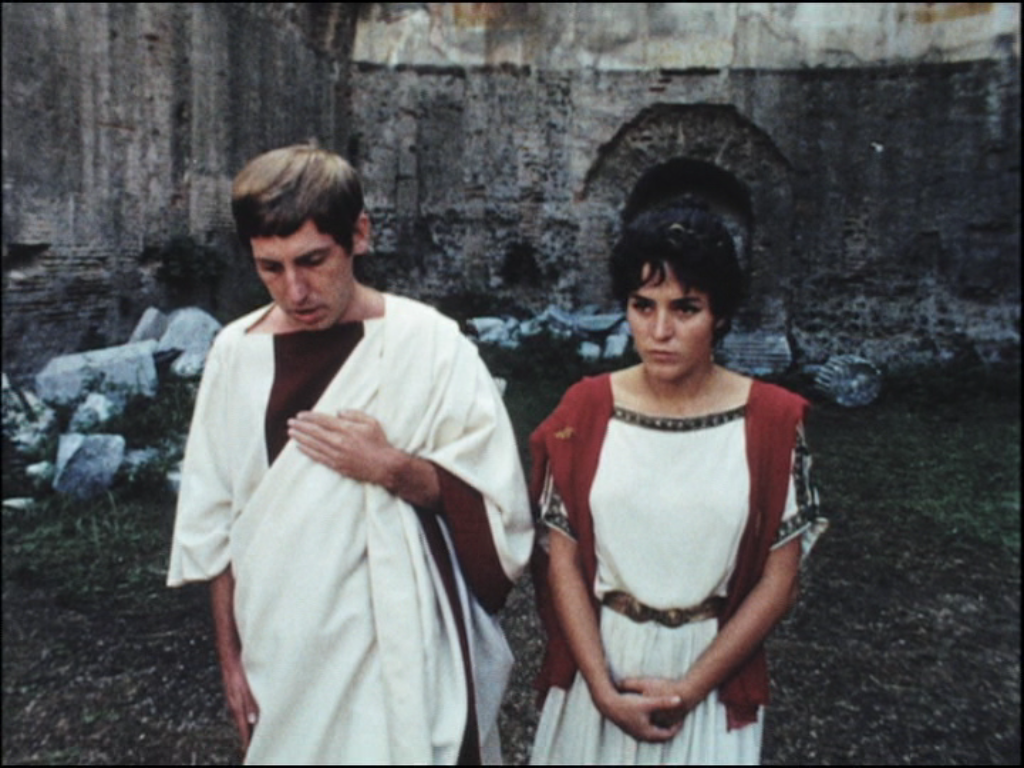 These beings at grips with work, with the sun, the wind, the text, desire, money, passions, fatigue, with history, would no longer be actors. But men, amateurs or officials, workers or idlers, peasants or writers, men and women, flesh and desire, confronting texts, materials, resistances and their own history. Struggling too, and naked in sun or rain. Here too the film would be a documentary.

It would no longer be a matter of telling stories, but of telling history: passion of all passions, narrative of all narratives.

So there would be History, men and women, and blocks—not scenes. Each film would be a game between blocks—of unequal duration—spaced far apart, where the spacing would play as well; where the spacing, its distance, the blank and the ellipse, the suppression of narrative articulations through which cinema ordinarily displays its infirmity—in short, the interval, as Vertov would have said, would be a figure. Where everything would be a sign: emptiness as well as fullness, words as well as silence, immobility as well as movement. Where the film would say that it was to be read, as reality is to be read so that it can be transformed. And there one would be, facing it as unarmed, or as armed, as in reality. Where what would be given to read, understand and transform would no longer be significations—fixed, arrested, dead—but relationships of material meanings.

Yet for all this the film would not be a pure metaphor or an aesthetic displacement of social relations: that would be too easy. And it would most vehemently repel the idea of passing for a model or for a giver of lessons.

But, instead, with its means, its aim, it would be the place of a transformation. Delivering no message but a sign, in its way, that the shock can begin, and here or by others be brought to its term.

At the most, the indication of this shock, the sign of the fissure, the euphoria of destruction (why not destroy? she says) which knows somewhere that it is the first stone. It is seen, which is already a great deal.

Cinema without filiation—without origins, one might be tempted to say; but such an affirmation no sooner risked than it would seem deceptive. Here too it is just the opposite: it is the business of works of rupture to reinvent their precursors. Have the films of Dreyer been seen—their violence, their desire, their aleatory and peremptory form?