Cinema Nearer to the Earth by Jean-Claude Biette (1982. Translation by Ted Fendt) 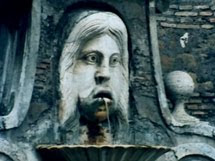 There is, I believe, in all of Jean-Marie Straub’s films, an active mixture of two passions: one for politics and one for aesthetics. The first is based on hate, the second on love. In these films, hate is the driving force behind the political passion, love that of the aesthetic. Passions are very much at stake, and this appears as much when the films are violently refused as when they are adored: those who reject them are not confused about what they are rejecting. Two kinds of characters or figures exist between these two poles. The positive ones, who are either resistance fighters – characters that are so strong as to not be entirely lucid (the grandmother in Not Reconciled) or that have a lucidity that exceeds reality (Moses) – artists (with a great capacity to resist) – Bach, Schönberg – or resistance writers – Brecht, Pavese, Fortini (with, in this last example, the chance of being able to put the writer face to face with his writing), and the other, negative ones – bankers, lawyers, soldiers, men of power, agents of repression and democratic opportunists. I’m setting out here a separation and a notion that determines even the contents of Straub’s films, as I interpret them. But love and hate are not pure and one-sided with the first matching the positive characters and the second matching the negative ones. On the other hand, hate isn’t the only complexion that the political passion takes (Straub loves the oppressed), nor is love the only complexion the aesthetic passion takes (he hates clichés, shots that don’t rhyme with anything, superfluous shot durations, and pornography). Love and hate are directly linked and they trade back and forth, but this mixture of two passions – whose exact composition is unknown – is precisely what guides the more or less great success of Straub’s films. Because they both belong to reality and they both express themselves, they are what create this new reality that is the film. Politics and aesthetics are also directly linked in these films even though in public Straub always places politics before aesthetics, which doesn’t exactly describe the reality of his films or the more and more sensual character that is becoming noticeable. More and more, the most beautiful sequences move away from the political passion and get closer to the aesthetic one, and thus we have Too Early, Too Late which comes out today and can be summarized as the combination of two documentaries, one on the French countryside, one on the Egyptian countryside.

If we look at the entirety of J.-M. Straub and D. Huillet’s work, it seems that the most significant film is Moses and Aaron. It contains all the figures from the other films and dares in its excessiveness a fusion of politics and religion (a possible metaphor for the aesthetic), and it shows the struggle between a rather positive character (Straub seems to favor the intransigent spiritual guide, Moses, politically) and a rather negative character (Straub doesn’t like those who make compromises in order to be understood) while entrusting to the aesthetic the work of regulating this duel and attacking directly the political impulses locked within Schönberg’s libretto. As a rule, the aesthetic has to count only on its own forces in order to tackle “politics.” Thus, there exists in Straub’s films (with what one can guess is Danièle Huillet’s vigilance) a capacity for engagement (and, thus, of withdrawal as well), sometimes by way of a political decision, sometimes by way of an aesthetic decision. If I have separated the positive and the negative characters in a very basic manner, it is under the pretense of considering the fact that in practice such characters find, by passing through Straub’s cinematographic device, a more complex existence which they had the potential for in the source texts, and then these are, first of all, in the present in which the spectators live, filmed actors. Once incarnated by the actors, even the negative characters resist (against the ideological traps identified by Straub in the texts and offered by the characters that bring the texts to life) and in the aesthetic process executed by Straub. He takes off his toga of hate (politics) in order to put on his toga of love (aesthetics).

At a certain point, the term “politics” proves to be insufficient. Let’s replace it with “history.” Traces and inscriptions have been talked about a lot in regards to these films. Everything that bears witness to and guards the memory of human actions is the made the subject and the very substance of these films. Can one film history? Straub tries hard, in any case. But isn’t the cinema the art of the present? If we rely on the examples provided by major films, it would appear that before being a matter of essences or nature, it is an aesthetic process. I believe that this conception of cinema as the art of the present dates back to the translation – or the critical realization – by Jean Renoir of Chaplin’s cinema and, maybe above all, of Griffith’s. Charleston (Charleston Parade), La Fille de l’eau (Whirlpool of Fate), and La petite marchande d’allumettes (The Little Match Girl) are films that return to Griffith and develop, in French culture (while suppressing the fictional), what is most profoundly linked to the present: the living truth of the actor. And the art of the present is, in this process of recording via the image (and then via image and sound), that which, within the actor, reaches for or claws at something, that which puts up a fight. Straub’s cinema comes from this Griffith-Renoir movement. The same aesthetic is involved, with the difference beginning at the moment when history provokes in Straub a mixture of love and hate such that all the rigor of an aesthetic is not too much to overcome and resolve it. This resistance of the actors – and we know what traps are placed under their feet, above their heads, etc. in this cinema – is what allows this element of fragility, this degree of mortality to appear in these “negative” characters. They share this with the “positive” characters in the form of bared arms, exposed necks, voices pushed to the point of fatigue, faces drained from the effort made to speak and haggard from lived experiences (what professional actors can rarely give in the ‘cinema-as-art-of-the-present’ aesthetic). That the positive and the negative characters are treated in the same, quasi-documentary manner in their cinematographic inscription allows the love-hate tension on the political side to be resolved in the love-hate tension – strictly aesthetic – between history and the present, between traces (on stones, on paper, that one can read – Fortini – or decipher – Bach, Schönberg) and obstacles: the actors placed in between the text and the anti-naturalist memorization, between the energy that they would like to freely employ and the obligation to submit to the mysterious and implacable orders of each shot.

In the French countryside, Too Early, Too Late shows us roads, fences, pastures, fields, cows, villages and market towns, as well as the sky and clouds, and we hear, captured by the direct sound, all sorts of noises and bird songs. In the Egyptian countryside the film shows us the land grown wild or covered in planted vegetation, paved and unpaved roads, waterways, walls, a railroad track, fortifications, a factory and lots of workers coming out, women, men, and children who come and go, peasants who are going to work or coming home, bikes that pass, mopeds, cars, trucks, and carts, and we hear with all this, in direct sound, in addition to events than we can’t see (an extraordinary far-off rumble, like a continuous bass hum). Too Early, Too Late is composed of panoramic shots in which the rotating movements capture the elements of the “scenery,” stopping and re-starting, including and excluding, by some kind of cryptic decision, the individuals in the shot, admiring them as they pass by. The grass, the clouds, the sky, the light, and the movement of the human beings establishes the present, the only element of the show. And this time, no one is speaking in front of us. Where then is the history? It is, first of all, in the first shot of the film, outside of the country: something of a reminder of the worst, the Place de la Bastille, filmed as we have never seen it, overrun by the perpetual movement of cars. And it is in two commentaries spoken, if I may say so, off screen. For the French countryside, a text by Engels that is an account of the beggars in certain French villages before 1789 and, for the Egyptian countryside, a text extracted from a book (by Mahmoud Hussein) published by Maspero relating the history of Egypt and its efforts to escape from colonialism. History is also in the extracts of Egypt’s official archival footage, the images and sounds of which are integrated into the continual flow of the film.

What is history’s role in this film? It consists in employing not a tension that would be able to confront the aesthetic violence of the Straubian project, but a pressure that only sets in motion a quantifiable movement of signifieds. The Marxist discourse (even if it is partly Engels’) menaces these landscapes; it determines a path to the people that we see, just as much as capitalist exploitation in the case of the French peasants (made present by graffiti on a wall) and colonialism (and neo-colonialisms) in the case of the common people and the members of the underclass in Egypt is supposed to, in this film, menace them and determine their path. It even goes so far as producing a sort of very unpleasing shock when we hear the signifier “repression” at the moment that we see a police officer stopping some children from going near the camera. This means that the desire to give meaning (here, during the length of a second, and in a more constant manner by the commentary) does not manage to find any grounds for communication with the aesthetic project and, thus, the political-aesthetic tension is not constructed, but imposed. The shot of the Bastille and the archival footage, however, participate in a genuine construction of this tension. So much the worse for us! Nobody will be able to explain why John Ford insisted on reverence and solemnity.
Let’s consider what is splendid about this film. It is a pure documentary the way that Playtime is a purely comedic film. Too Early, Too Late exists through its own secret rhythms, formed by this series of panoramic shots. The lesson, today, is no longer about history, but about shots – how does one film these landscapes? A strange mixture this time. Love is inseparable from the awareness of beauty, and hate remains (almost constantly) off-screen in order to watch over what this, possibly guilty, beauty doesn’t invade. The Griffithian feeling about nature is no longer what surrounds a Renoirian inscription of bodies. Here, it goes further. It is possible that the next Straub and Huillet film will be taken from a real novel.