Spanky and Our Gang:
Jean- Pierre Gorin's MY CRASY LIFE
by
BARBARA OSBORN
(from The Independent, November 1992, Vol. 15, No. 9)

The oil-and-water formula of Jean-Pierre Gorin's new film, My Crasy Life, is only part of what makes it so provocative. Flippantly described by Gorin as "Robert Flaherty meets Sam Fuller," the film is a hybrid that accomplishes its mix well enough for the documentary jury at Sundance last winter (1992) to give it a special award for its "experimental play between documentary and fiction." But the film's significance runs far deeper than the debate over whether it's fair and proper to script scenes in a documentary. My Crasy Life, which was financed by the BBC in association with FR3, seeks to empty itself of moral judgments about its subject: gang life. Since it does not present gangs as a social "problem," the film consequently poses no "solutions"—an approach that directly challenges the formula used throughout network television and in many independent works.

My Crasy Life (the "s" mimics Latino English) is about a Samoan Crip gang in Long Beach known as the Sons of Samoa (SOS). Most scenes were developed, scripted, and acted by the SOS gangsters or gangbangers, as they're commonly called. The script evolved through a series of meetings with the gang. Gorin brought in a laptop computer, they told him stories about their lives, and he started mapping out scenes. Gorin would later come back with scenes written down to check for accuracy and get suggestions for revisions. 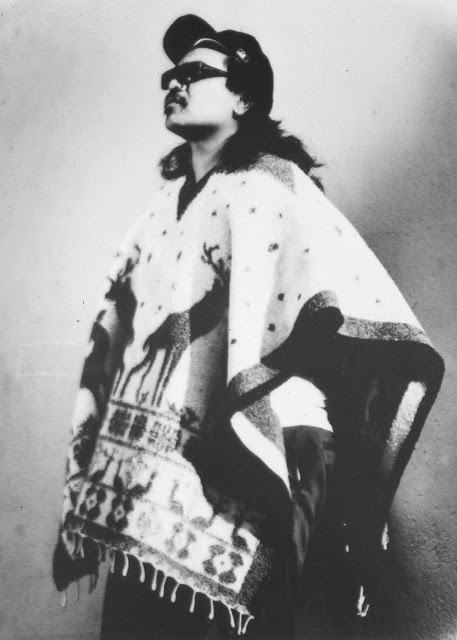 "A great deal of this film was about listening to what these guys had to say and translating that into a cinematic strategy that would impact the film," Gorin says. The gang had very clear ideas about how they wanted to be portrayed. They were intent on including material about their Samoan heritage. The film contains scenes where they discuss Samoan ghosts, and one gang member is filmed taking a trip to Samoa—their mythic paradise lost—to visit relatives. The boyz adamantly refused to be depicted as victims or as a symptom of social disease. They were most concerned with a fidelity to the details of their lives and with portraying some of the joy and empowerment of gangbanging.

The film was produced for $260,000. Gorin and crew shot for 15 days in Long Beach with additional filming in Samoa and Hawaii. As they shot, Gorin showed the gang "video dailies" but, he says, the gangsters were less interested in watching than in doing. They came to the editing room only once. But during the shooting, they were fully engaged, yelling "action" and "cut" and debating continuity questions. Gorin offered to pay the gang for their work, but the boyz preferred that Gorin and his producers, Cameron Allen and Daniel Marks, pay for a recording session instead. The film includes the scene in which the gangsters go to the studio to record their raps. 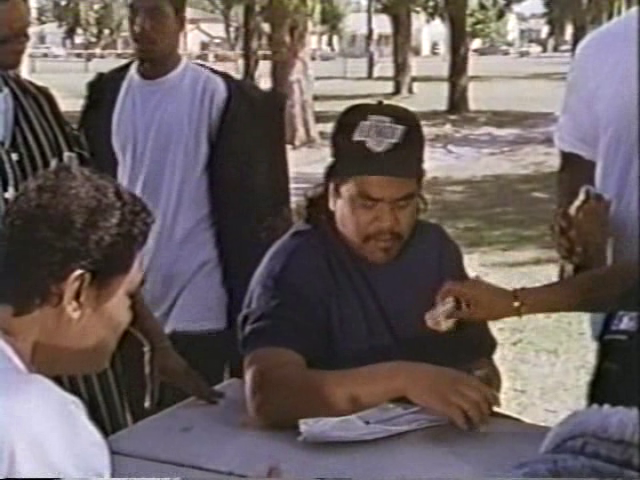 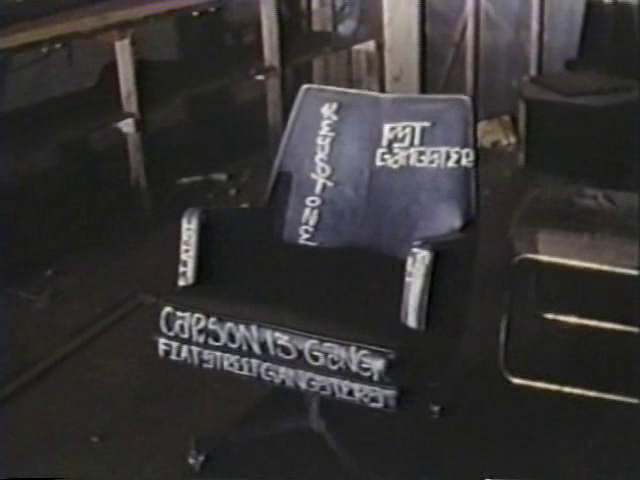 Documentary sequences are interwoven throughout the film. (The terms "documentary" and "fiction" are used here in a narrow sense simply to describe degrees of preparation and set up.) Among the documentary elements are a series of unscripted talking head interviews that probe gangster experience. Under the knowing questioning of an older gangbanger named Bullet, the boyz speak openly about why they joined the gang and when they'll quit; their identity as Samoans and Crips ("If you had take out a Samoan or a Crip, who would you kill?"); their experience with family, drugs, crime, jail, and getting even (Joker recalls getting stabbed and the homeys "taking care of what needed to be taken care of ").

Gorin's documentary camera also follows Sergeant Jerry Kaono on patrol. The police car searchlight cuts the nocturnal stillness of the Long Beach alleys, slithering over doorways and into garages, searching out illegal activity. But Kaono's patrol is uneventful. Like concentric circles, the police presence surrounds gang turf, but the two worlds rarely touch. The most unorthodox and conspicuous of the film's fictional devices is a voice that emanates from the sergeant's squad-car computer. It is just one of many "trip wires," as Gorin calls them—dozens of moments in which viewers are jostled from a complacent reading of the film and reminded that what they are seeing is neither cinema vérité nor Hollywood drama. Gorin resists the temptation to make the voice a source of authority or analysis, although it starts out that way in the film. But the computer's commentary becomes discursive and inconsistent. The patrol car voice taunts the officer's efforts to help the gangsters ("Why don't you give it up, Sergeant?"), coos seductively ("Do you think of me as your companion, Jerry?"), and ruminates on the incomprehensibility of gangster life ("These gangsters, Jerry, do they hold as much mystery for you as they do for me?"). As Gorin explained to an audience at Sundance, the computer's authority degenerates: "It's the voice of God with a Ph.D in Sociology. Then it's Hal. Then it's not Big Brother, but Little Brother, like a faithful dog. So the information is less up here [in the computer] and more coming out of the gangsters themselves."

Gorin's mix of "fiction" and "documentary" wasn't meant to dupe the audience into mistaking one for the other. In fact, Gorin is incredulous when viewers don't catch the fiction. "There's a mugging scene with three changes of camera angle!" he sputters. "A gangster comes out of the Samoan jungle and says 'Fuck Margaret Mead' and people think it's documentary!" 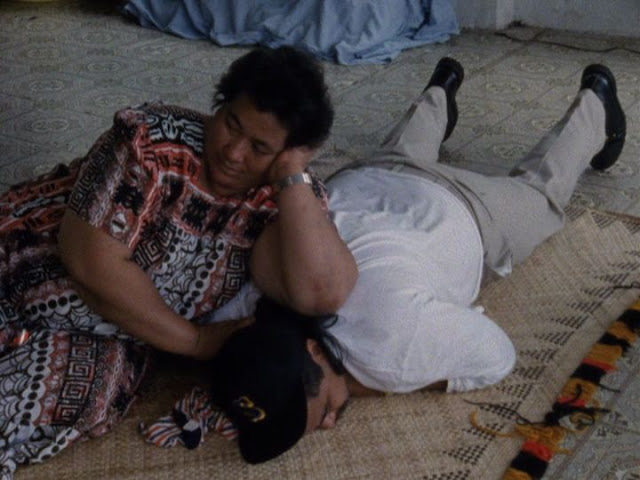 The film takes for granted the irrelevance of which strategy gets closer to "the truth" of the gangsters' lives and self-image. In an interview, Gorin offered an example of how documentary and fiction blended during the filmmaking process. (Gorin prefers the term "documentation," a word that offers a sense of the process of accumulating layers of information and the drama inherent in that process.) In one instance, they had developed a scene around a routine event in the 'hood: Someone comes to buy drugs. Initial filming was interrupted by a real-life dope deal. They waited and started over. Meanwhile, the gangster who was supposed to transact the fictional deal suggested that he put a "jack move" (mug) on the buyer, played by the film's white intern. Gorin agreed, but didn't tell the intern about the change of plans. The scene, says Gorin, is "close to the ground and, at the same time, it is a pure, fictional construct."

Arguably the film's most radical aspect is not its play between fictional and dramatic sequences, but its relation to its subject. Gorin did not want the film to be about the Sons of Samoa, at least not in the sense that a documentary normally has a subject and the filmmaker, sitting in judgment, takes a position outside it. (Gorin, who can be witheringly direct and passionately opinionated, remarked at the Sundance panel Truth In Documentary that, "the pandering voyeurism" of a film like Paris Is Burning was the opposite of what he wanted to do.) Gorin began making documentaries because dramatic filmmaking was formally "locked up." But now he's convinced that documentary is just as entrenched in its own constraining codes of subject-object positioning and melodramatic stories in which conflicts must be resolved. Gorin worked with Godard making films as part of the Dziga Vertov collective in the late sixties. Since coming to the U.S. 15 years ago, he has made two other documentaries: Poto and Cabengo and Routine Pleasures. In discussing My Crasy Life, Gorin repeatedly mentions not a documentary but Luis Buñuel's fiction film Los Olvidados as a touchstone. That film is about Mexico City street kids and was based on stories Buñuel drew from reform school records. Los Olvidados is a film that Buñuel argued had a social argument but made no moral judgments.

Likewise My Crasy Life departs from moral grandstanding. There are no good guys or bad guys. In this sense, the film is closer to how gangsters think about their own lives. "They think tragedy," says Gorin, "we think melodrama, with morality. They don't judge their lives or indict the system; they just live them. I want a fiction disengaged from melodrama."

Daniel Marks, one of the film's producers and an anthropologist, adds that people never realize how normal gangster life is for gangsters. And yet despite the film's absence of melodramatic framing, the film is not dispassionate. Says Gorin, "When you're on the inside, you feel the warmth, the community. You don't feel the violence." But there is violence aplenty, as the film indicates through its inclusion of police homicide photos showing some bloody hits. "The film avoids violence," Gorin noted at Sundance, "yet it gets to 99 percent of what their lives are about—which is young men talking like old guys who see the end of their lives coming up. 'How old was so-and-so when he died?' 'Fourteen'; That's the tragedy." 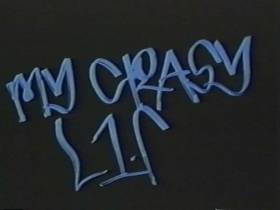 While challenging cinematic forms, My Crasy Life tries simultaneously to challenge public discourse surrounding gangs. In Southern California, gangs are a subject of daily, almost obsessive, discussion in the press. Some 375 gang-related homicides took place in Los Angeles last year. Despite the endless coverage, the gangs virtually never have a chance to speak for themselves. (It took three days of rioting in Los Angeles before it occurred to any news operation, in this case, Nightline, that they might actually talk to gang members.) "We did not produce a film that replicates bastardized social analysis," says Marks. Gorin agrees that they wanted to change the discourse, and thus eliminated from the film any interpretation by "experts" from the justice system, the welfare system, and so on.

Lacking such interpretation, the film impresses its audience as much with the subject's ultimate impenetrability as with its depiction of gangster life. If documentaries are meant to bring problems and people within our comprehension, then My Crasy Life deliberately fails; gangster life remains
full of paradox and opaque. "You are as inside the ethos, pathos, and rhetoric of gangster life as you can be," says Gorin, and at the same time, "you get your true distance from it."

Perhaps the clearest example of this is the Gangster Glossary. Gang members take turns standing in front of the camera, defining gangspeak terms. Gorin calls the sequence a "Dadaist poem" in which slang is used to define slang. The list begins with a couple of easy words, terms that, once defined, we understand. We think we're getting someplace. But as the list continues, the rat-a-tat-tat of gangster speech becomes increasingly difficult to follow and we're left reeling in a swirl of meaning that we only half follow:

O.G: Original gangster. A gangster back in the old days.
Baby Gangster: A peewee like me and the rest of the homeys. Young bucks trying to come up.
Golddigger: A bitch who tries to come into the `hood and juice you for your duckets.
Trippin: When a nigger comes out with a swole face.
Low: Like me, Lil Cool. Crazy.
Wolf Ticket: A lyin' ass motherfucka.
207: Motherfuckin' kidnap.
187: Murderer. B.K.
Sissy: A 6-0 from the Westside of L.A. Fuck dem muthafuckers.
Sherm: The stuff they shoot in dead people to make em so they don't smell bad.
C Rag: Our color. The color of justice.
Rip: Someone like me. A Crip.
Gauge: A gun. A rifle that you pump. You shoot slobs with.

Anticipating our bewilderment, one of the boyz directly addresses the viewer: "For all you mother-fuckers who don't understand what they saying, as far as you IBM motherfuckers, this is straight from the gangster 'hood. Trey love and we outta here."

Barbara Osborn is a journalist who writes about film, TV, and technology. She has also worked with gang members through the Los Angeles Probation Department.