A series of posts paying homage to Jerry Lewis, his world and the world through him.


1. There's something in Which Way to the Front? that was already at work in Lewis’s previous films and that finally realizes itself here, hence this particularly strident and not very enjoyable movie where none of the previous tenderness remains. Clearly, Joseph Levitch is turning a corner, and today he's closer than ever to the impossible dream (to be one, to gather oneself up and/or to choose oneself, never to split again). He hasn’t chosen once and for all to be the definite all too human victim, which films like The Nutty Professor or The Ladies' Man ultimately valorized, instead he prefers—and this choice should surprise no one—to be the strong man, the self-made man, Jerry Lewis the producer. The era of this splitting, the mechanisms of which were so easy and exhilarating to play with and to dismantle, is definitely fading away. The desert is growing. And while it’s true that Lewis still treats us (and himself) to a few funny faces , it’s not so much to reassure his audience since—and this has not been noticed enough—these cries, faces, and gurglings (borborygmes) occur only twice in the film: at the beginning, and as a response to the word Rejected.

2. Rejected by what? By a system (the army) which has no need for prestigious  names, but for bodies, cannon fodder (chair à pâté) to make war. This is the decisive novelty of Which Way to the Front? in the lewisian problem; the Lewis of this latest movie is reduced to a word, a brand , a Name. As if ‘to accept oneself’, a known lewisian theme, meant: to renounce one’s body and be only one’s name, what one’s name promises, if it promises anything. And ‘Byers’ stands for ’Buyers’ (a plural which indicates that the splitting, although no longer visible, still survives somewhere; the waxen and tragic mask of Lewis in the first shots are there to prove it). Besides, Byers is a third of the Name and—insignificant himself as a body—he merely inherits from this Name a fortune so colossal that he cannot manage it (and squanders it). In his previous films, Lewis in the end has us (women, powerful people, the public) see him as a Body, a subject, an interiority, an intimacy, etc.. Here, there’s nothing like that: he only learns to behave according to the rules of a game which are no longer his. Since, strictly speaking, he no longer has a body (this body being ‘played’ by the trio Byers III = the three ‘Byers’ = Hackle, Bland, Love), he isn’t going to repeat his mistake (of reporting to the army medical examination, to offer his body and thus lose all possibility of language), and since he is only his Name, he is going to act out the meaning of that Name: a buyer, he is going to buy.

3. From then on, the fiction progresses through a rather strong logic. (Let’s mention, without spending too much time on it, that the analogy Lewis/film-making and Byers/war-making functions throughout the movie. The only elements of war selected and shown are the ones that evoke the making of a film: making garments, choice and purchase of props, learning one’s role, rehearsals, etc., without even mentioning Byers’s use of documentary films which he projects on board his yacht.) A fiction rather unbelievable, implausible, but an incredibility which is a new style for Lewis: no longer the meticulous and ‘realist’ arrangement of a situation which slowly turns to madness with the irruption of Lewis-the actor, but rather an implausibility (or discontinuity, we should say) equally distributed among all the elements of the fiction (for example, the very presence of a Black man in a German uniform is not an issue). Not only does Lewis seem unconcerned with the articulations of his story (no longer prevented, but bypassed, avoided, ignored), but it’s the very principle of diegesis that he seems to leave to chance, the question: how (and by what right) does one move from one thing to another? He asked himself this question with force in all his previous films because the question was then but a particular case of another passage, the passage from one instance to an other within a split personality (hence the bravura moments like the seen transformation of Love back to Kelp at the end of The Nutty Professor). But this splitting is no longer the explicit subject of Which Way to the Front?, nor the motor of its fiction. 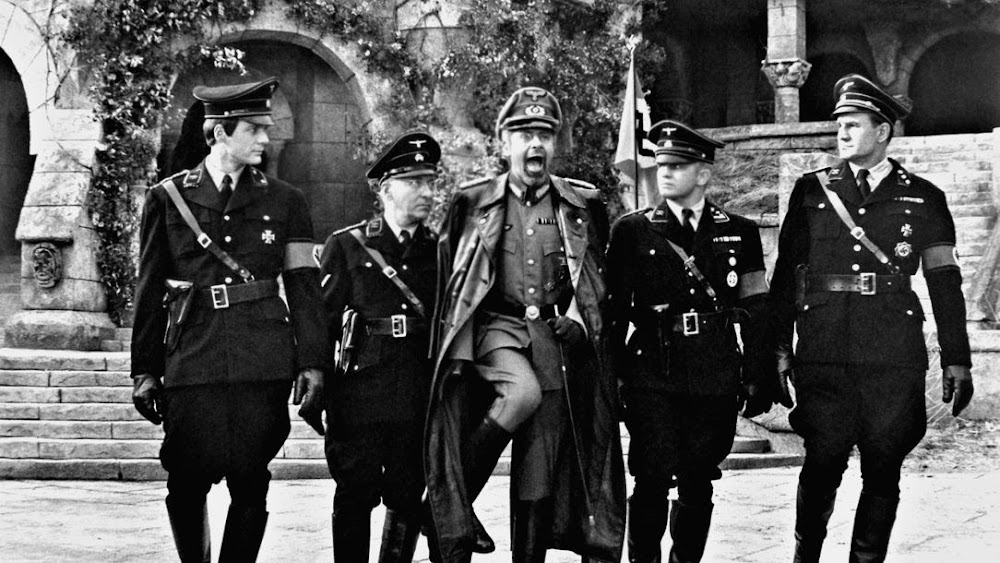 4. Why such an apparent loosening? Because Lewis-Byers has taken his role seriously. What is wanted of him? Only what he can give: his Name, and/thus the Money that his Name promises, the possibility to exchange, infinite for him (hence shots of foreign currencies and women loaded aboard his yacht). The story no longer progresses linearly in a homogeneous space, but only through one of these generic equivalents: language, money.  No Lewis film has played so much with language, words and word play; no Lewis film has so openly talked about money and the power it confers (we should spend more time looking at all the dimensions of ‘Jewishness’ at last affirmed in the movie in two opposite senses: Byers’s physical appearance/Name of the decorated German solider: Levitch). No film has gone to such lengths to point out their complicity: Speech is gold.

5. It is thus thanks to the transformative power of words that Lewis-Byers clears himself a path to and through the Front. It is (as a master of language, archives at hand) by both naming and paying that he can secure collaborators (the Japanese who also appeared in Blue Gardenia, then Love, Hackle and Bland to whom he gives a check after calling their name). It is indeed by speaking the same language that General Buck (his sentences are merely repeated back to him) is duped (Buck = Dollar). In the kingdom of words, no resistance is possible or even thinkable, no instruction or password will hold up. But get the Name wrong and the crude reality of war irrupts (Anzio rather than Naples). And there’s no escaping this reality, that of the Body, this body that Lewis seems to have definitely lost and against which the film is targeted (and to which it is dedicated). Kesserling is defeated precisely because he’s only a body (hence the difficulty for Byers-Kesserling to face his role: whisky and beer before the military council, the blitz of a woman in heat). Hitler is defeated, at the end of a magnificent scene, because again he’s only a mere Body, hence the dance, the reference to Eva, to cooking, the conspicuous masochism, etc.. If  Byers–Kesserling–Lewis–Levitch can mime these mad bodies (in an unbearably bleak manner), it is so as to destroy them (but for how long?). Now he has won, which is to say what he has lost is unspeakable [1]: his Word is gold: (Deutsch) Mark My Words. 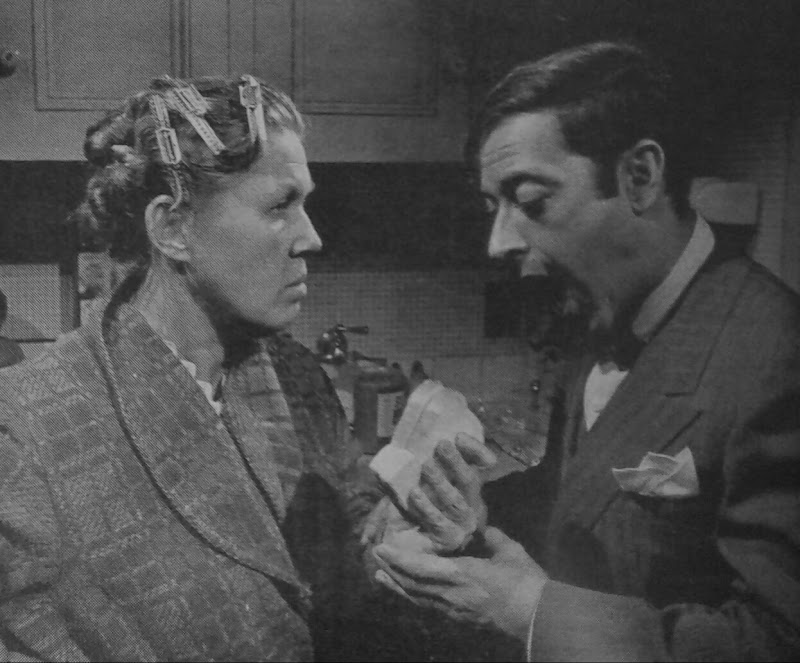 [1] The drama of the subject in the Verb is that it faces the proof of its lack of being. 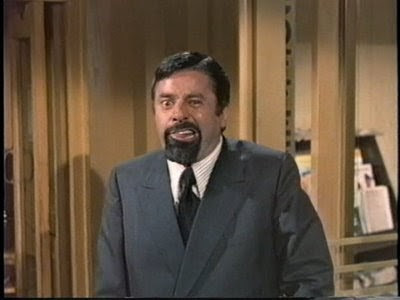 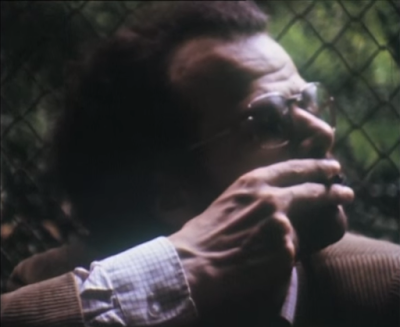 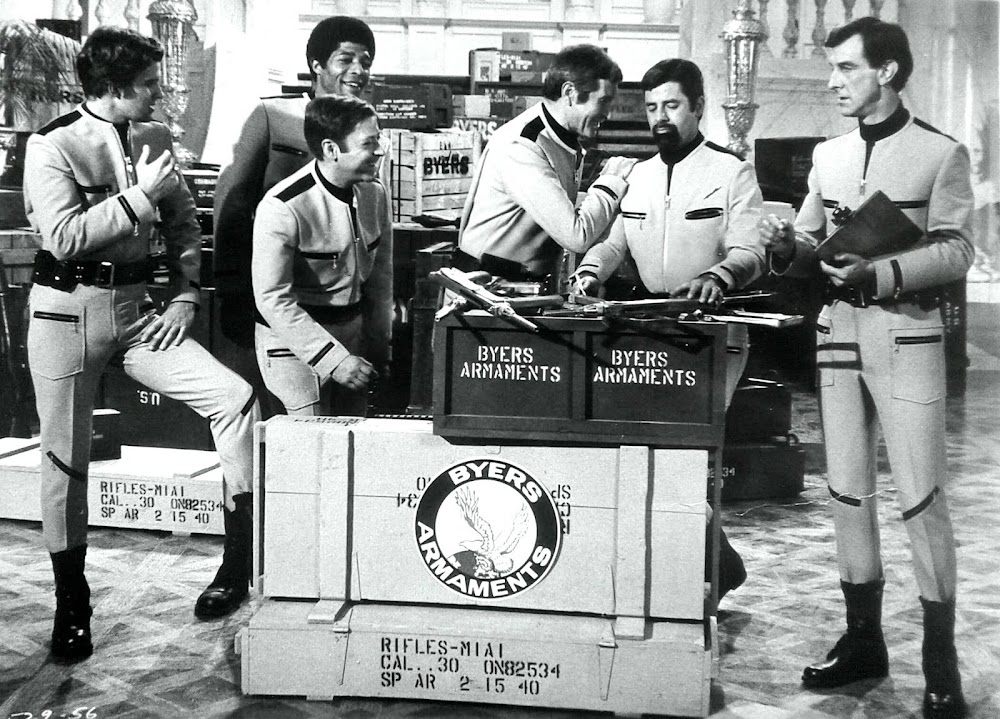 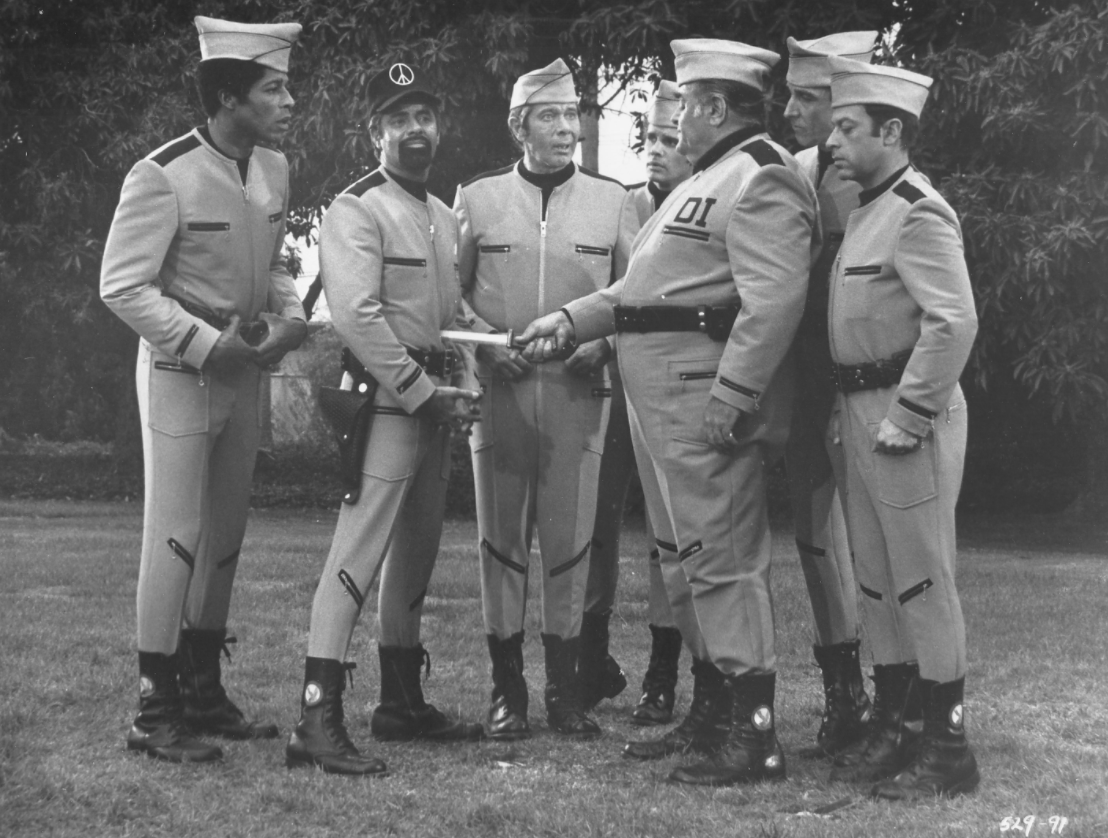 
Which Way to the Front? (1970) will screen this Friday, March 16th, 2018 at 8pm at The Bijou Theater (California Institute of the Arts) preceded by Charlie Chaplin's short The Bond (1918) and an excerpt of Histoire(s) du cinéma (1988-98, Jean-Luc Godard), as part of the Kino Slang Cine-Club. For more information, see here.